Assume Freedom. Recent photography and video work. The artist's images are taken in areas of the world beset by conflict such as Palestine, Serbia, and Iraq. Created while in residency or through his relationships with his subjects, Collins’ work comprises a complex investigation of portraiture, documentary traditions, beauty, violence, and the intersection of politics and popular culture. The show includes 3 video projections and 16 large-scale photographic prints. 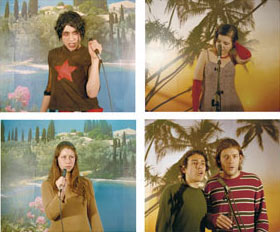 The University Art Museum, California State University, Long Beach is proud to present Phil Collins: assume freedom, an exhibition of recent photography and video work by British artist Phil Collins. Collins’ images are taken in areas of the world beset by conflict such as Palestine, Serbia, and Iraq. Created while in residency or through his relationships with his subjects, Collins’ work comprises a complex investigation of portraiture, documentary traditions, beauty, violence, and the intersection of politics and popular culture. The UAM exhibition will include three video projections and 16 large-scale photographic prints.

A key work in the exhibition, they shoot horses, depicts Palestinian teens engaged in a daylong dance marathon. A seven-hour, two-screen projection comprising about 14 hours of footage, the installation features two separate groups of young people, each of whom dances without a break over the course of two successive days in Ramallah, Palestine in February 2004. As each day goes on, the dancers become fatigued, and some drop out. (The title is borrowed from They Shoot Horses, Don’t They?, the 1969 film based on a Depression-era novel about a dance marathon.) Set to an upbeat soundtrack of soul, disco and house music, and projected onto adjacent walls, it is a celebration of youthful energy, and an unusual portrait of people from a region typically defined by the political realities of their world.

The video installation el mundo no escuchara' (Portuguese for “the world won’t listen") documents a karaoke festival for the fans of the 80s British rock band the Smiths that was organized over a 10-week period in Bogota', Colombia in 2004. Collins began by recruiting local musicians to build the karaoke machine. Eager participants then responded to posters calling for “the shy, the dissatisfied, and the narcissistic to come and have their chance to shine!" Against a backdrop of fantasy landscape wallpapers, local performers of all ages, dressed in full retro Smiths gear, exuberantly belt out the lead singer Morrissey’s hits in perfect Manchester-accented English. In the third video in the exhibition, how to make a refugee (1999), Collins uses a hand-held camera to film a journalistic photo shoot of a boy and his family in Kosovo. Domestic details that will be invisible in the resulting photo essay are thus given play in Collins’ work.

Collins believes that the act of photographing an individual is as much about the relationship he constructs with the “subject" as it is about the images evolving from that encounter. The work is outside of the photojournalistic approach, it is not meant to be a portrait of ethnography, but the medium of photography is most suited to enhance the artist’s curiosity about other human beings. The image abbas amini, perhaps the most haunting of Collins’ images, is also atypical of his oeuvre in that it depicts a public figure—an Iranian poet seeking asylum in the UK after having been imprisoned and tortured in Iran. After British authorities attempted to deport him in 2003, Amini sewed up his eyes, ears, and mouth in protest, which resulted in the government reversing its decision indefinitely. The photograph remains as an unsettling record of Amini’s mute despair.

About Phil Collins
Born in Great Britain in 1970, video artist and photographer Phil Collins works in conflict-ridden areas, interacting with local communities and recording intimate portraits of people and sites within these regions. He has been based in numerous locations over the years, including Belfast, Belgrade, Baghdad, and Bogota'. He currently resides in the United Kingdom. Collins was awarded the Absolut Prize in 2000 and the Paul Hamlyn Award in 2001. His solo exhibitions include yeah...you, baby you at Milton Keynes Gallery, Milton Keynes, England (2005); Wexner Center for the Arts, Columbus, Ohio (2005); Espacio La Rebeca, Bogota' (2004); and Temple Bar Gallery & Studios, Dublin (2002). Group exhibitions include Witness, Barbican Centre, London (2003); Uniform: Order & Disorder, P.S.1 Contemporary Art Center, New York (2001); and Manifesta 3, Ljubljana (2000). Collins’ work was recently included in the Ninth Istanbul Biennial (2005), and British Art Show 6 (2005). His newest publication, yeah... you, baby you, includes essays by Kate Bush, Clare Bishop & Francesco Manacorda, Bill Horrigan, and Larry Rinder, along with an interview with the artist by filmmaker Todd Haynes. Collins is represented in many public and private collections in Europe and the US, including the Irish Museum of Modern Art, Dublin; the Tate Gallery, London; and REFCO Photography Collection, Chicago. He is represented by Kerlin Gallery, Dublin; and Tanya Bonakdar Gallery, New York.