Smile machines presents about 30 contemporary and historical works reflecting the relationship between art, humour and technology. Anne-Marie Duguet has curated a show that investigates the critical potential of humour in different artistic strategies. Works by 27 artists: Maja Bajevic, Robert Filliou, Jodi, George Maciunas, Antoni Muntadas, Nam June Paik... transmediale.06 is devoted to Reality addicts and their artistic strategies with which they subvert the technological paradigm of reality. Throughout the festival, the Salon features in-depth conversations about contemporary art practices. 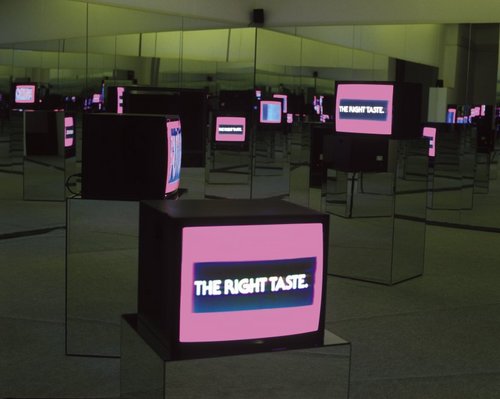 The 19th transmediale festival again explores how art and society are changing under the influence of media and technologies which become more and more dominant in our everyday lives. In contemporary art, digital media like video and electronic networks are now so wide-spread that a strict definition of what constitutes ‘media art’ seems no longer possible. We have therefore decided to alter the subtitle of the festival: transmediale is no longer called ‘international media art festival’, but ‘festival for art and digital culture’. This name is supposed to demonstrate the step away from the niche of ‘media art’, yet still points to the field of tension between culture and digital technologies, which continues to form the main driving force of the festival.

After four successful years at House of World Cultures, forthcoming renovation works have forced us to move our festival to the Akademie der Kuenste.

In the context of transmediale.06, the art exhibition smile machines presents about 30 contemporary and historical works reflecting the relationship between art, humour and technology. The French media art historian Anne-Marie Duguet has curated a show that investigates the critical potential of humour in different artistic strategies. The exhibition shows a humorous examination of the art system as well as critical reflections on technology and society.

Accessing the exhibition you will be confronted with works by Nam June Paik ("The Thinker") and Les Levine ("I Am an Artist") who ironically reflect the role and the self-conception of artists. Antoni Muntadas' installation "Slogans" deconstructs advertising messages and reveals their endless repetition as a power strategy, while Robert Filliou's video "And so on, End so soon: Done 3 Times" shows the subversive dimension of repetitive variations.

Christian Moller's video installation "Cheese" is a cynical contribution to media critique: He asked six actors to smile into a camera for as long as possible, while they are watched by an emotion detector. A decrease in "cheerfulness" triggered an alarm, demanding more "seriousness" on the job.

Black Humour seems a mainly female strategy in SMILE MACHINES: Eva Meyer-Keller's video series "Death is Certain" shows cherries being tortured, quartered, poisoned and brought to "death" in many gruesome ways. Tamy Ben-Tor's video series "Hitler, The Horror and The Hurrah" is a very special parody on documentaries and musicals for the "inherent Hitler" in all of us.

Two robots, both useless and perverted caricatures of their kind, will molest the visitors of the exhibition: Simon Penny's "Petit Mal" is programmed with a curious "personality", which makes it appear a little out of control. The "Helpless Robot" by Norman White seems pitying, because it is literally helpless - but it can talk. By asking for help, the machine turns the compassionate visitor into its servant.


transmediale.06 is devoted to REALITY ADDICTS and their artistic strategies with which they subvert the technological paradigm of reality. REALITY ADDICTS don't attempt to understand or evaluate the world. They install little traps, commit themselves to nonsense, and seek to multiply reality by means of exaggeration, rupture, distance, and ever new diversions. Find out more about the theme of the upcoming edition of the annual festival.

The Salon programme of transmediale.06 presents artistic projects and panel discussions about current issues in art and digital culture. German and international work in progress projects and initiatives present their work and invite the audience for an exchange of ideas. Curators and critics discuss the art scenes in countries like Italy, Belarus, Moldova, New Zealand, Australia, Canada, Brazil, and China. Artists participating in the Smile Machines exhibition talk about their work. Throughout the festival, the transmediale Salon features in-depth conversations about contemporary art practices. In the evenings, the programme concludes with performances.

The following are only a few examples of the extensive Salon programme. Check http://www.transmediale.de for the full Salon schedule.

transmediale is funded by the German Federal Cultural Foundation.