Fabrice Gygi has compared himself to a figurative painter in that he copies objects that he observes in the world around him. Gygi uses their characteristics in forms and materials but displaces their function and context. "Walking & Falling" works by: Anna Gaskell, Ann Hamilton, Rebecca Horn, Sigalit Landau, Richard Long, Bruce Nauman, Danica Phelps, Sam Taylor-Wood and Vangelis Vlahos. 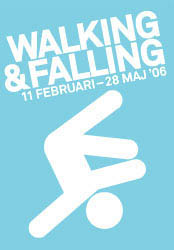 Fabrice Gygi places riots barricades at museums, hangs up bombs so that they resemble chandeliers, and makes a provisional voting booth for an undecided nation. Artist Fabrice Gygi has compared himself to a figurative painter in that he copies objects that he observes in the world around him. Gygi uses their characteristics in forms and materials but displaces their function and context. At Magasin 3, the rooms are filled with sculptures in industrial and military materials such as stainless steel, tarpaulin, and tension straps.

Gygi critiques authoritarian systems in our culture by studying everyday architecture and ordinary objects. He questions the police’s preparations ahead of expected riots and our obsession with feeling secure. Fabrice Gygi was born in Switzerland in 1965. He lives and works in Geneva. The solo show at Magasin 3 Stockholm Konsthall is his first exhibition in the Nordic countries. An exhibition of Fabrice Gygi's works is currently showing at the Orange County Museum of Art in Newport Beach, California. Recently his works have been shown separately at Kunstmuseum St.Gallen and Musee d'art moderne et contemporain (Mamco), Geneva.

The exhibition is supported by Pro Helvetia - Arts Council of Switzerland

With each step you fall forward slightly. And then catch yourself from falling. In Laurie Anderson’s quote, the everyday is paramount. Her observation on walking, on how we unconsciously are falling with every step, constitutes the point of departure for this exhibition, both as an observation and as a metaphor for life. Our sense of balance, the precondition for our ability to walk, also plays a central role in this exhibition.

The works in this exhibition have a poetic, contemplative, and surrealistic affinity to her quote. Rebecca Horn was fascinated by the way a woman walked and created a unicorn costume for her. During the early 1970s, Horn worked with costumes that elongated the shoulders, fingers, or head and emphasized the body’s movements. In “Walking 9-5 Amsterdam" (2001), Danica Phelps exchanges "working" with "walking." She walked every day for a month from 9 am to 5 pm, an average workday. Bruce Nauman has examined walking in a number of performance pieces — he has been stamping in his studio, walked in an exaggerated manner and in various patterns. Vangelis Vlahos and Sigalit Landau challenge our sense of balance. In Vlahos’s video “Untitled Knight 1" (1997), a knight in shining armor roller-skates in a gymnastics hall, while Landau stands balanced on a watermelon in the Dead Sea.

All the participating artists are represented in Magasin 3’s permanent collection but several of the works have been borrowed for “Walking & Falling".