Two American women painters (Sharon Shapiro and Deana Title) have lived as and observed their subjects navigate modern society with tools and information often outdated and sometimes unrealistic. Laurent Dareau exploits his native cultural views in twenty-first century America with wife, children and a suburban home to portray the beauty, circumstance, power and fragility of his favorite form. 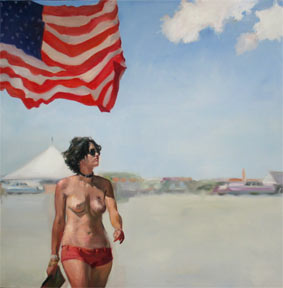 Lawrence Asher Gallery presents three provocative artist’s study and rendering of contemporary American women. Two American women painters have lived as and observed their subjects navigate modern society with tools and information often outdated, sometimes unrealistic but never insignificant. Sharon Shapiro and Deana Title use luscious brush strokes to fashion icons of feminine complexity shrouded in a smirk or a pout. Sharon Shapiro applies a rich life composed of motherhood, Southern American sensibility and pace along with a profound understanding and embrace of contemporary American culture. Daena Title employs a similar milieu of experiences that somehow direct the viewer in and through the challenged souls she paints.

French-born painter and recent immigrant, Laurent Dareau exploits his native cultural views in twenty-first century America with wife, children and a suburban home to portray the beauty, circumstance, power and fragility of his favorite form. Laurent’s large luscious works on panel and canvas tempt and defy while his detailed smaller canvasses please and provoke. His appreciation is unquestioned while his query remains unresolved.

Laurent Dareau - “I have worked from the idea that things are not clear in the US. I discovered ads for prostitutes in the East Bay Express, a Bay Area news paper that on the same page have medicine for your sex addiction and a girl to call and “exercise" with. When a star shows a piece of breast on TV, everybody turns crazy, even if the dresses are made to let viewers hope that one is going to be exposed. Nudity is pure, as long as we see it purely. The mind gives meaning to different versions of sexual imagery. Sexuality is more than a part of life. It is life. We have to face this aspect of life individually.

"In my Hotfish series, partly shown here, fish just can go forward, never go back, like a human being, like the male sex too, who, if it could, would go through the body. It is our violence, the violence of our society, but we have to live with it. Those girls, those images, that are picked up from Internet and magazines are how this society shows women’s, and men’s bodies, as envelopes. We can hate them, but meanwhile we desire them. It is this pride that religion and a kind of society want to erase. We are animals, but we have to control these urges, we have to live with it. This sex appeal is the juice of life. Some want to veil women to try to avoid it. Sex and desire are freedom, but it is also a poison, a sweet poison. Freedom is to be won, it is not given, it is when we cut our ties, whatever they are, that we get it (freedom). It is a choice, even if it kills you. Those girls are prostitutes, but they are also sisters and mothers. Freedom is dangerous and frightening, but it is this power and excitement that makes life worth living. We marry to procreate; we want a mother who could play wife and mistress. We are the snake, or the fish, in the garden of heaven..."

Laurent lives in Monrovia, CA with his wife and two children.

Sharon Shapiro - “I am fascinated by the conflict between inner and outer existence; for instance, the need to stay composed and still while the interior is churning. Painting is a good vessel for this tension. There is a decorative aspect in my work, influenced in part by childhood memories of color and patterns, but underneath that colorful surface lurks isolation, fragility, and yearning.

Conversation has always intrigued me; the constant editing, the questions asked, what details are remembered. The coded and overt signals that exist in most forms of communication, also subsist in my work. I try to draw upon both my internal world of desires, as well as society’s ambivalent depictions of women to transform the generic figures into images of individuality.

My ongoing interest in figures stems from my intention to address issues of the human condition, particularly the female condition, including sexuality, the physical body, fertility, and an awareness of mortality.

Images of women that I saw growing up shaped my personal idea of sexuality and simultaneously created a deep sense of unease. I paint mostly girls and women in an attempt to decode femininity, desire, and the push-pull between control and compliance felt as a female.

I work from found photos, ads from the 50’s and 60’s, images of my daughter and myself in order to raise the question: Has our vulnerability to outside forces--Such as fashion culture, media presentations, our peers, our mothers-- decreased or increased over time?"

Sharon Shapiro lives in Charlottesville, Virginia with her daughter, Ryan.

Daena Title - “Images of women fascinate me. On the one hand they are reflections of society’s hold on us, it’s expectations and traps. On the other, these images can reveal our deepest hopes for ourselves, our sensuousness, sexuality, and nurturing our soul.

The women in this series I think of as Wrapped, Trapped or Free. Some are stuck, lost in mirrors of mirrors, or wrapped up in cloth. Others are free, centered, happy and calm. I enjoy being a woman painting women, creating images of these powerful creators of life. For me, the body is a dynamic synthesis of the known and the unknown, the neutral and the colorful, the familiar and the surprising, the openly exposed and the deeply buried, the organic and the geometric. I love taking it apart and putting it back together: losing it and then finding it again, making it real, and yet not.

Then there i's the last stage of this process: your viewing of these images. As each of you recreates them re-forming them in your mind’s eye, they change from what only I saw, to what you see. Your presence completes this circle as you move from voyeur to co-creator. How amazing that painting allows strangers to share that most intimate act of sight."

Daena lives and paints in her Los Angeles home with her husband and family.

Jana Charl - "I seek to capture how women are viewed and how they feel." This colorful, detailed collection of polymer and clay mixed media sculptures that range from minimalist figures to highly decorated representations were created from 1993 - 2006.