The Measure Of Every Pause 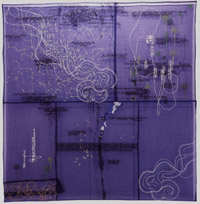 P.S.1 Contemporary Art Center is pleased to present Jessica Rankin’s first solo museum exhibition. Rankin, a New York-based artist originally from Australia, will show five recent large-scale embroidered tapestries as well as a new installation made specifically for P.S.1. Jessica Rankin: The Measure of Every Pause is on view from February 9 through May 1, 2006

Rankin’s artistic process is incredibly labor intensive. She works with needle and thread to create what she calls “brainmaps." Words, images and symbols form landscapes across her organdy canvases and create imagery reminiscent of illuminated manuscripts. Her visual vocabulary of abstracted language, architectural forms, astronomical signs and street maps is stitched onto sheer fabric ranging from intense indigo to translucent whites and pale earth colors.

“ANENDLESSRELEASEOFLANGUAGE" is one example of the many text segments swirling across Nocturne (2004), one of the works in the exhibition. It is a seven-by-seven feet embroidery decorated with star constellations and swirling non-patterns. The dark-blue, semi-transparent organdy resembles a night sky, floating an inch away from the wall, giving each row of words a doubling shadow.

Jessica Rankin (b. 1971) received a M.F.A. from Rutgers University in 1997. She has exhibited in New York, Los Angeles, Houston, as well as internationally in Berlin, London, and Melbourne. Her work will be presented at White Cube in London in spring 2006.

Jessica Rankin: The Measure of Every Pause is curated by P.S.1 Director Alanna Heiss.

The exhibition is generously supported by Agnes Gund and Daniel Shapiro.