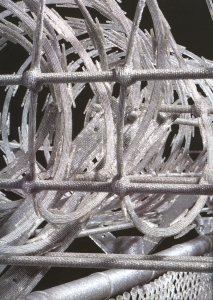 Combining visionary, conceptual and craft approaches, Lou makes mixed-media sculptures and room-size installations that are suggestive of a transcendental reality. Lou’s work often employs familiar, domestic forms, crafted from a variety of materials such as steel, wood, papier-mache' and fibreglass, which is then covered with tiny glass beads that are painstakingly applied, one at a time, with tweezers. Dazzling and opulent and constantly glistening with refracted light, her sculptures bristle with what Peter Schjeldahl has aptly described as ‘surreal excrescence’.

This exhibition, a meditation on the vulnerability of the human body and the architecture of confinement, will include several new figurative sculptures as well as two major sculptural installations. Security Fence (2005) is a large scale cage made up of four steel, chain link walls, topped by rings of barbed wire and Cell (2004-2006), as its name suggests, is a room based on the approximate dimensions of a death row prison cell, a kind of externalized map of the prisoner’s mind. Both Security Fence and Cell, like Lou’s immense earlier installations Kitchen (1991-1995) and Back Yard (1995-1999) are characterized by the absence of their real human subject. But whereas the absent subject in Kitchen and Back Yard could be imagined through the details and accessories carefully laid out to view, in Lou’s two new installations the human body is implied simply through the empty volume created by the surrounding architecture. Both Cell and Security Fence are monochromatic and employ iconic forms that make direct reference to Minimalist art in its use of repetition, formal perfection and materiality. In contrast to this, the organic form of a gnarled tree trunk, Scaffold (2005-2006), its surface covered with shimmering golden beads, juts directly out from the wall.

Lou’s work has an immediate ‘shock’ content that works on different levels: first, an acknowledgement of the work’s sheer aesthetic impact and secondly the slower comprehension of the labour that underlies its construction. But whereas in Lou’s earlier works the startling clarity of the image is often a counterpoint to the lengthy process of its realization, for the execution of Cell, Lou further slowed down the process by using beads of the smallest variety with their holes all facing up in an exacting hour-by-hour approach in order to ‘use time as an art material’.

Concluding this body of work are three male figures in states of anguish. In The Seer (2005-2006), a man becomes the means of turning his body back in on himself. Bent over double, his body becomes an instrument of impending self-mutilation, the surface of his body covered with silver-lined beads, placed with the exactitude and precision of a surgeon. In Homeostasis (2005-2006) a naked man stands prostrate with his hands up against the wall in an act of surrender. In this work, the dissolution between inside and outside is explored as the ornate surface of Lou’s cell-like material ‘covers’ the form while exposing the systems of the body, both corporeal and esoteric. In The Vessel (2005-2006), Christ, the universal symbol of torture and agony holds up a broken log over his shoulders. This figure is beheaded, and bejewelled, with its neck carved out, becoming a vessel into which the world deposits its pain and suffering.

Lou has had numerous solo exhibitions internationally, including Museum Kunst Palast, Dusseldorf, Henie Onstad Kunstsenter, Oslo and Fondacio' Joan Miro', Barcelona. She was a 2002 recipient of the MacArthur Foundation Fellowship.

Liza Lou’s film Born Again (2004), in which the artist tells the compelling and traumatic story of her Pentecostal upbringing in Minnesota, will be screened at 52 Hoxton Square from 3 - 25 March courtesy of Penny Govett and Mick Kerr.

A fully illustrated catalogue, with a text by Jeanette Winterson and an interview with Tim Marlow, will accompany the exhibition.