A complete Guide to Re-write Your History 2

Group show. The exhibition is a second comprehensive guide to the rewriting of history, a desire to create an all-encompassing narrative with which one's life is explained. This time the focus is (the public monument as an accessible icon of) collective memory and also: the re-writing of these common grounds and references. 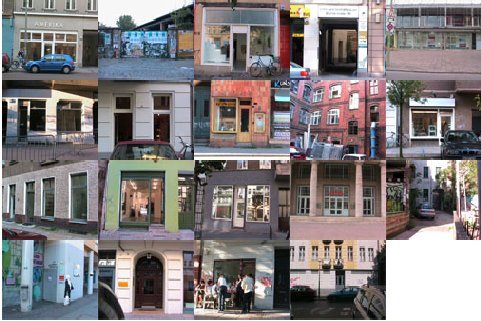 This exhibition is a second comprehensive guide to the rewriting of history, a desire to create an all-encompassing narrative with which one's life is explained. This time the focus is (the public monument as an accessible icon of) collective memory and also: the re-writing of these common grounds and references.

Little Warsaw presented a single statue in the Hungarian Pavilion at the 50th Venice Biennale, The Body of Nefertiti. It is a contemporary complement to the famous female portrait in Berlin’s Agyptisches Museum und Papyrus Sammlung. In Sparwasser HQ the artists will show the video made in Berlin, where the head is finally placed on the body.

Little Warsaw simultaneously produce works of art and the peculiar systems of reference that stand behind them. The public sculpture is especially important as something that in its message and appearance seeks to be 'communal', the vehicle of ideas and aesthetic values whose tradition greatly relies on the notion of consensus, agreement on aesthetics and content. The artists are interested in popular and historic symbols, the chance to revitalize them, and put them in contemporary contexts. With such gestures Little Warsaw tries to establish a connection between the present and the temporality of art, as well as its potential for mediation, to use forms that ensure the references of the work are comprehensible to more than a select minority. (by Zsolt Petra'nyi)

Carrying out an investigation into performative strategies from recent decades, Carola Dertnig presents a critical feminist perspective of viewing the female body. In the work, the Austrian artist places the female actor into the central area of interest, when she re-writes photo works of the Vienna actionists (Wiener Aktionismus). She intervenes into a canonised genre within recent art history, changing the content of the work, and in this way bringing the photos into a contemporary context.

Shakespeare holds a place in collective memory and as such may be considered a monument. In the video work from 2002 the Singapore artist Ming Wong reinterprets the great existential question as uttered by the Danish prince Hamlet,To be... or not to be... etc, and articulates his inarticulateness in grappling with questions of existence and identity. New patterns of meaning begin to emerge.

Francois Bucher (Colombia) re-enacts a piece of European literature by having Franz Kafka’s allegory “Before the Law interpreted live over a telephone line by Katharine Gun. Gun was a translator, working with the British secret service who chose to leak information, compromising the U.S. and U.K. governments in their push for a U.N. resolution on the invasion of Iraq. Gun disclosed their plans to illegally wiretap the delegations of the Security Council holding the balance of power at the U.N. building. She was acquitted by the U.K. government when it became clear to them that her court case would become a trial on the war’s legality.

Maryam Jafri, an artist with Pakistani and American roots who lives in Denmark, shows a work in the exhibition which examines the narrative arc of earlier colonial wars of conquest, revealing the Iraq war and the war on Terror to conform to this predetermined script. A photo collage and a poster, it features an iconic image from the toppling of Saddam's statue in April 2003. The text is an excerpt from The Times of London reprint of Lt. General Sir Stanley Maude's proclamation Freedom for the Arabs issued when British occupation forces conquered Baghdad in 1917.

Maryam Jafri's work is a loan from the exhibition Rethinking Nordic Colonialism: A Postcolonial Exhibition Project in Five Acts which opens its first station in Reykjavik on March 24. Rethinking Nordic Colonialism takes as its central concern the missing self awareness and discourse in a postcolonial Nordic region. In Sparwasser HQ a computer with the extensive homepage and a user guide to the 4 stations will be exhibited.
http://www.rethinking-nordic-colonialism.org

The exhibition in Sparwasser HQ will include the film The End of the Endless, a documentary film that has uses the scenery of the upcoming disappearance of some jobs and professions in Brazil. The film is by Lucas Bambozzi, Cao Guimaraes, Beto Magalhaes. It is part of the screening series portraits in film of the exhibition Again for Tomorrow, which recently opened in RCA, London.
http://www.cca.rca.ac.uk/againfortomorrow