On the Outlands of Empire. Engaged in the contemporary fascination of exposing the marginal activities of international capitalism, Elliott's paintings offer complex commentaries on excess and waste in our society. 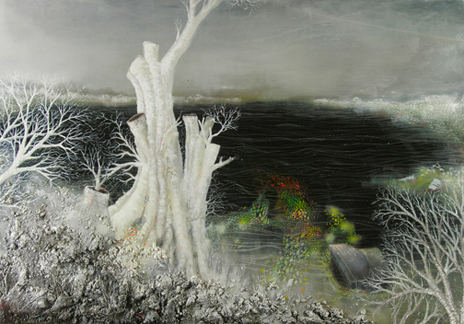 On the Outlands of Empire

31Grand is pleased to announce the opening of a solo exhibition of new paintings by Jon Elliott. Engaged in the contemporary fascination of exposing the marginal activities of international capitalism, Jon Elliott¹s paintings offer complex commentaries on excess and waste in our society.

Rivers, bays, and open-ocean, historical avenues of commercial trade have been major substrates for the transmission of cultural ideas. They have also traditionally been inheritors of much of the waste of civilization. With the advent of the internet, computers, like television and film have become the most important transmitters of culture and fantasy in technological societies. As they become obsolete, the excessive glut of these objects spills out around the remote borders of our society, including our waterways, and those of distant societies.

In Elliott¹s recent paintings, piles of computers and televisions mixed with the occasional oil/waste drum, populate various waterways in somewhat ambiguous settings that appear to be on the outskirts of urban centers. Radiant, though somewhat toxic skies drip, and cast their neon color schemes over these dark and sublime waterscapes, while mysterious, undulating patterns appear like life-forms born of chemical and digital run-off. Even with their somewhat bleak subject matter, these paintings depict signs of a tenacious survival, not only of the natural world, but also of the humanity within. The lights in these cities still glow, and an occasional burst of fireworks dots the skies, showing us that these cites are alive, and these paintings do not represent a distant future.