To what extent should an artist understand the implication of his or her findings? 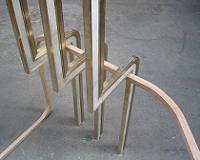 In response to an invitation to work with Project and The Model Arts and Niland Gallery, the artist Bojan Sarcevic has proposed the following question - To what extent should an artist understand the implication of his or her findings?

This question can be approached in a number of different ways. It can be looked at in terms of how much control artists have over the reception of their work, on audience perception and the effect that an artwork can have once it is put on display. It can be considered in relation to curating or art criticism, whereby another party acts as an intermediary between the work and the audience, staging or interpreting it on their behalf and on behalf of the artist. This question can also be seen in the light of practice that functions as research, or through art that produces concrete results in the world.

The project has several public manifestations including an intervention in the gallery spaces in Dublin and Sligo by Sarcevic and a conversation between the artist and critic Caoimhi'n Mac Giolla Le'ith. There will also be seminar in which artists and academics will respond to the question and subsequently the publication of an artists book featuring images by the Sarcevic, commissioned texts from Diedrich Diedrichsen and Sabastian Egenhofer and transcriptions from the seminar (two essays not confirmed). In addition a screening of films selected by Bojan Sarcevic, Sarah Glennie and Grant Watson will approach this question tangentially, using artworks which (either through their complexity, opaqueness or use of fiction) provoke the subsequent question of what it means to 'understand a work of art.'

Seminar - Friday 12 May 2 - 5pm - Project, presented in partnership with the Model.
Visual arts practitioners will be asked to respond to the question - To what extent should an artist understand the implications of his or her findings? Speakers will include Will Bradley (UK) Jan Verwoert (Germany) and Annie Fletcher (IRL/NL). The Seminar is presented in collaboration with Critical Voices.

Book launch - The Model Arts and Niland Gallery
A publication conceived by the artist featuring images by Sarcevic, commissioned texts and transcriptions from the seminar will be launched in the summer of 2006. This publication has been made possible with an Arts Council Commissions Grant.