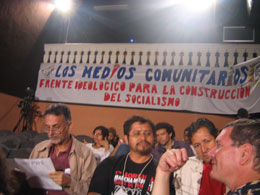 The University of California, Berkeley Art Museum and Pacific Film Archive (BAM/PFA) presents the second of two exhibitions in Now-Time Venezuela: Media Along the Path of the Bolivarian Process, a project curated for the MATRIX Program for Contemporary Art by Chris Gilbert. Now-Time Venezuela, Part 2: Revolutionary Television in Catia features a selection of the work of the community television station Catia TVe, and will open at BAM/PFA on May 14 and run through July 16, 2006.

Now-Time Venezuela: Media Along the Path of the Bolivarian Process is in solidarity with the Bolivarian Revolution in Venezuela, and relates to the revolutionary transformation that has occurred in Venezuela following the election of Hugo Cha'vez to presidency in 1998. The project aims to support and contribute to this process, and secondarily, to advance a theory of art and culture: that cultural products find their creative agency in alignment with broader processes of political and economic transformation.

The first exhibition, Part 1: Worker-Controlled Factories (on view through May 26, 2006) features a newly commissioned multi-screen projection by Dario Azzellini and Oliver Ressler on the subject of Venezuela's worker-controlled factories. The second exhibition, Part 2: Revolutionary Television in Catia, samples the work of the community television station Catia TVe, in western Caracas. Independent media channels such as Catia TVe have become a central part of everyday life in Venezuela, where they contest the corporate media landscape. Catia TVe is a true television "channel" in the sense that some 70 to 80 percent of its programming is produced by small groups of community organizers and activists, who have taken part in workshops the station offers. Catia TVe uses participatory communication to construct socialism for the twenty-first century through research, education, and organization.

Though Catia TVe once did limited guerilla broadcasts with an improvised transmitter, new Venezuelan telecommunications laws combined with some state support have shifted its position to one of greater empowerment and means. Today the station broadcasts fourteen hours per day, operates a well-equipped editing facility and powerful transmitter, and maintains a substantial equipment inventory for loan. Part 2: Revolutionary Television in Catia samples the work facilitated by the station and also includes two newly commissioned works made especially for the exhibition: a self-reflexive piece describing Catia TVe's working methods, and a series of messages for the people of the United States from the people of west Caracas.

Panel Discussion: Catia TVe and Media Activism
Sunday, May 14, 2:30 p.m.
Museum Theater
With curator Chris Gilbert, representatives from Catia TVe and San Francisco Indymedia will discuss the important role of media collectives and media activism in Venezuela and internationally. In Spanish and English, with translation provided. A reception will follow.

The MATRIX Program at the UC Berkeley Art Museum is made possible by the generous endowment gift of Phyllis C. Wattis. Additional donors to the MATRIX Program include the UAM Council MATRIX Endowment and Glenn and April Bucksbaum.

The University of California, Berkeley Art Museum and Pacific Film Archive is supported by the National Endowment for the Arts, National Endowment for the Humanities, Institute of Museum and Library Services, Alameda County Arts Commission, and City of Berkeley Civic Arts Commission. Additional support is provided by the William and Flora Hewlett Foundation, Koret Foundation, Bernard Osher Foundation, Packard Humanities Institute, other private foundations, and our individual donors and members.