Only Loyal Love Will Bring Me Happiness. Lives & Works is the title of Micah Lexier's new and constantly evolving series. True to its title this series explores elements and images from the artist's personal and working life. As Lexier's subject matter has expanded his choice of materials has consolidated. 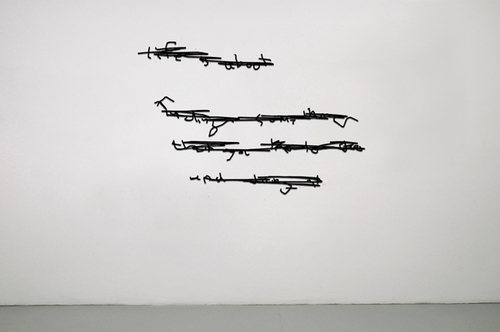 Lives & Works 2. Only Loyal Love Will Bring Me Happiness

Lives & Works is the title of Micah Lexier's new and constantly evolving series. True to its title this series explores elements and images from the artist's personal and working life. As Lexier's subject matter has expanded his choice of materials has consolidated. Consisting exclusively of line drawings and other marks made by the hand, the works are then rendered in laser-cut steel, painted waterjet-cut aluminum, or produced as letterpress prints on paper. Lives & Works, with its expansive subject matter reduced material palette and personal content, represents an exciting and significant evolution in Lexier's abundant and varied practice. For Lexier, whose work has intensely and extensively explored ideas of measurement, Lives & Works opens the way to a wider variety of subjects and interests.

This exhibition marks his second solo Berlin presentation at Gitte Weise Gallery and leads on from a recent project in Toronto in the autumn of 2005. Although these projects are open, with a tendency to be all encompassing, they are not without their respective structures and rules. In this way they follow the conceptual underpinnings of previous projects such as New York Diary or Touch Down Drawings. (Where drawings were created at the precise moment of landing in an airplane.) Each of the Lives & Works exhibitions are subtitled with a quote or phrase that has a particular resonance for the artist. For instance the subtitle for this exhibition, Only Loyal Love Will Bring Me Happiness, is a quote from Sinead O'Conner's 2000 song What Doesn't Belong To Me. Additionally each of the individual artworks form part of a sub-series that make up the larger Lives & Works project. On view in Berlin are works selected from the sub-series The Un-self-conscious Mark, Tracings, Pairs and Revelations.

Micah Lexier was born in Winnipeg in 1960, is currently living and working in New York City, and will be in attendance at the opening. Lexier’s work has been included in numerous solo and group exhibitions including the New Museum in New York, the Whitechapel Art Gallery in London, Museu de Arte de Sao Paulo in Brazil, Fotofeis in Scotland, and The National Gallery of Canada in Ottawa. In addition to these exhibitions Lexier has produced numerous public commissions of which the most recent was David Then & Now, displayed in bus stop shelters throughout the city of Winnipeg, Canada, during the summer 2005. Lexier's work is in over 40 public collections including the Art Gallery of Ontario in Toronto, The Museum of Contemporary Art in Sydney, Australia, and The British Museum in London. The Artist and Gitte Weise Gallery would like to thank the Canadian Embassy in Berlin for their generosity and ongoing support. Please contact the Gallery for further information and visuals.