A new confrontation between the masters of the past and the creators of the present: Robert Mangold has chosen the wood carving of the Maison du Jouir (1901) made by Paul Gauguin for his studio in Atuana, as a reference for the architectural accomplishment of this work. Maquette du quartier de l'Opera by Annette Messager: the work denies all previous genius loci and generates its own space. 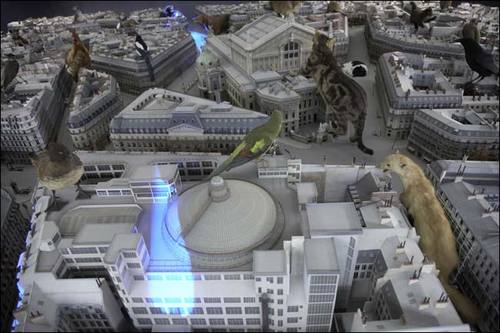 Maquette du quartier de l'Ope'ra
Annette Messager, Les Myste'res de Paris
Awarded the "Lion d'Or" at the Venice Biennale, Annette Messager has been developing, since the early 1970s, a demanding body of works which enables her to show the different facets of her identity. Autobiographical details are the essence of her work and art is seen as a means of conveying an individual personality, Annette Messager the "trickster" or "collector"... Scorning rich materials, she works with familiar everyday objects, driving her inspiration from popular art, and keenly admires Dubuffet’s Art brut or the small objects of the surrealists. Since she started travelling, Annette Messager has made a point of collecting images, sensations, everyday items randomly found or seen. Rejecting all concepts and theories, her work echoes a feeling of surprise, the weight of irony and distance, her desire to tell a story, her relationship with childhood, her fascination for darkness and the sudden appearance of unreality in the midst of what is commonplace.
The model for the Ope'ra area chosen by Annette Messager reflects her attachment to the idea of circulation, as some form of organic circulation whether blood or lymph. The work denies all previous genius loci and generates its own space. The artist plays on changes in scale, peoples with new beings part of the city which is both huge and minute, with empty disquieting and ghostly streets, a possible setting for a fantastic tale.

Paul Gauguin, Maison du Jouir
Robert Mangold, Column Structure I
Robert Mangold, an American artist born in 1937 states that he is more interested in "painting as an object" than in "painting as a window", and less concerned about what happened artistically between the Renaissance and Ce'zanne, than about pre Renaissance art and how the change triggered by Ce'zanne rippled on the history of 20th century art. Deeply influenced by Newman and Rothko, he is aware of the primary influence of Abstract Expressionism on his work. He raises the question of monumentality in painting and the immediacy of its impact. Most of the time, his works are monochrome, with irrigular contours and large in size. Their presence has an immediate effect: radiating in an unusual way, causing the actual space of the canvas to expand into the space that surrounds it. Whereas minimalism may be defined as a radical restriction of the artist's gesture, giving prominence again to the intellectual character of the idea, Mangold always offers a more complex reality where the primacy of painting and a serene monumentality come together. By opening new possibilities for painting - a renewed liberty, - Mangold constantly places perception at the heart of his work, rejecting demonstrative effects by using a strict economy of means.
Fascinated by greek vases, mosaics et Piero della Francesca, his work reaches a form of plenitude and classicism.
Mangold has chosen the wood carving of the Maison du Jouir (1901) made by Gauguin for his studio in Atuana, Tahiti, as a reference for the architectural accomplishment of this work.