A wall painting and a series of pictures - neither proclaim the end of painting nor do they attempt to better some other work. They paint around - or repaint - the work, by literally painting around the format the artist selected. 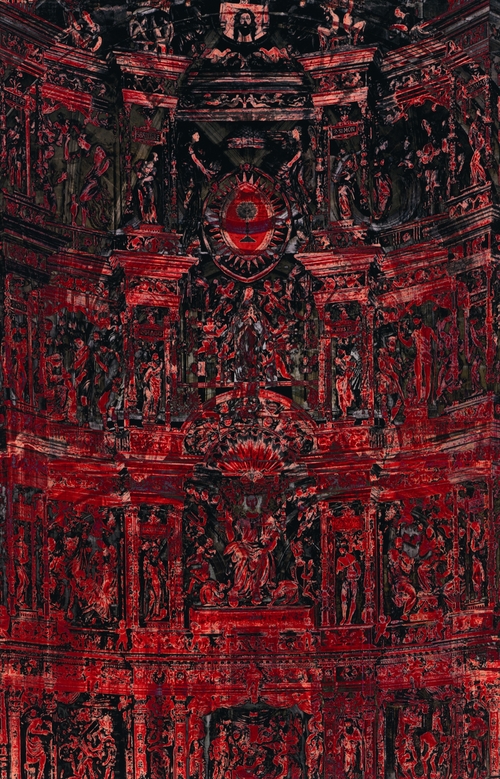 Friederike Feldmann's most recent works - a wall painting and a series of pictures - neither proclaim the end of painting nor do they attempt to better some other work. They paint around - or repaint - the work, by literally painting around the format the artist selected.

Feldmann's new wall painting in Galerie Barbara Weiss paints around the monumental format of wall painting. In contrast to the traditionally opulent use of this format, only the corners and edges of the gallery space are painted, leading to an intentional optical illusion. It seems as if the entire wall surface has been painted white with generous brushstrokes. But of course the opposite is the case - it is not the wall but only the corners and edges that Feldmann has painted.

Whereas Feldmann's well-known series of carpets, altars and mountains have hitherto produced soft images (Walter Benjamin) of painting, she is now also providing the sharp counterparts. This becomes apparent in the second part of this exhibition, the picture series. The series shows soft, out-of-focus images, because here too after-images of painting are produced: smudged cliche's, hallucinatory dream images of an historical form of painting.

The pictures in the series are in sharp focus because Feldmann adds precision to the historical genre that is at stake here. These images look like reproductions in the abstract expressionist style. But in contrast to Feldmann's altars or mountains this particular genre is here greatly zoomed in and brought into focus.

By using a variety of technical means - scanning, projection, reproduction - Feldmann is able to bring the depth or the surface of the image into and out of focus at will. And this is precisely the achievement of her painting: because she looks from the outside at the history of painting as an object she is able to alter this history in her own way.

This leads to a microscopic clarity within the unclear and vague forms that we otherwise fail to perceive; Feldmann displaces the action of painting to the margins. These operations on the margins reveal something that painting prefers to conceal: the margins and the borders that lead into the non-painted and the unpainterly, the depth and the power of the ground of the painting. Knut Ebeling