A group show which draws together artists whose practises address issues fraught with taboo and complex social politics, but approach these problematics obliquely. The exhibition, loaded with political commentary, asks us to consider our own responsibility towards such issues and engages us in an ambivalent debate. Works by: Adam Adach, Culture & Conflict Group, Gilbert & George, Siobhan Hapaska, Julian Hoeber, Maryam Irfan Ullah Khan, Shirin Neshat and Jim Shaw. 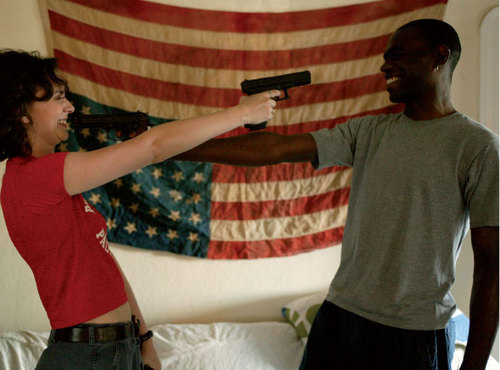 The exhibition has been curated by Iben la Cour

Emily Tsingou Gallery presents A Selected State - a group show which draws together artists whose practises address issues fraught with taboo and complex social politics, but approach these problematics obliquely. The artists involved deal with political agendas and ideologies leaving space for ambiguity in which the audience is invited to negotiate a political territory, their understanding of it and their own position within it. These works engage the viewer as participant in a conversation - responding to questions posed, rather than impartially, passively spectating. The exhibition, loaded with political commentary, asks us to consider our own responsibility towards such issues and engages us in an ambivalent debate. This uncertain ground is emblematic of our current political climate where it seems impossible, or perhaps inappropriate, to clearly master distinctions and ideologies.

Adam Adach (b. 1962, Poland) derives the imagery in his paintings from found material - photographs, books and magazines - mainly depicting life under totalitarian regimes. These documentary fragments have a strange dislocation from the history which they refer to and the viewer is forced to reconstruct a context for the personal yet anonymous mementoes. Reworking recognisable ideological motifs of Communism and Fascism the work re-explores twentieth century meta-narratives through overlooked, individual and personal stories.

Culture & Conflict Group founded in 1998 presents a new collaboration (Katie Barlow, John Buckley, David Crawforth, Shane Cullen) entitled ‘Courage to Refuse’. The work takes its name from a humanitarian resistance group in Israel and combines the names of its 638 members, transcribed in Hebrew, with documentary footage from Jenin and Israel. The text, sound and moving image are rendered to reflect the radical contrasts and tensions contained within that small geographical area.

Gilbert and George are widely known for their signature, large-scale, multi-panelled photo-montages which combine imagery and icons from contemporary culture. Blurring the boundaries between life and art, the provocative nature of their imagery challenges taboos and questions social conventions, whilst the frequent inclusion of their self-portraits place themselves at the centre of such debates. A nine-panel work will be included in the show. Entitled ‘Closed’, this work was made in the East End of London in the socio-political climate surrounding the events of 2001.

Siobhan Hapaska (b. 1963, Ireland) creates video, photography, sculpture and installations, which occupy a position between nature and artifice, organic and synthetic, the real and the abstract. Addressing historical and autobiographical subjects the work is evocative of alternative, utopian worlds. ‘Siberia’, a sculptural work included in the exhibition represents, both symbolically and literally, the human experience of displacement and political occupation.

Julian Hoeber (b. 1974, USA) works with the idea of distress and confusion towards American culture. ‘Talkers are No Good Doers’ is a feature-length, low-budget film inspired by writer Theodore Dreiser and directors John Cassavettes and Claude Chabrol. The narrative considers political activism, as it follows a group of disaffected characters spiralling into self-absorption and destruction. At the centre of Hoeber’s practise is a concern with revealing underlying structures and exposing artifice. Also exhibited at the gallery is a wall assemblage which draws together paraphernalia, drawings and found images which intersect with the narrative of the film and filmmaking process. Depicting isolated objects - flowers, guns, money, cartoons - Hoeber projects his observation of the world and search for meaning within the absurdity of contemporary life.

Maryam Irfan Ullah Khan (b. 1979, Pakistan) is a trained painter in the miniature tradition of her native country. Since arriving in the UK several years ago, Khan has spliced together the trends and traditions from ‘The West’ and ‘The East’ in an interrogation of Western perception of Pakistani culture and the female position within society. The new work presented here probes the idea of censure and explores the stereotypes of ‘desirable’ female appearance in Muslim Pakistani society and British tabloids.

Shirin Neshat (b. 1957, Iran) was exiled from her home country as a result of the 1979 Ayatollah Kohmeini’s Islamic revolution. In her photographs and films she subverts stereotypes and interrogates the ideology of Islam through her own displacement which she describes as ‘the state of living as a nomad - a stranger, both in respect to my own culture and my host country’ (Modern Painters, May 2006)

Jim Shaw (b. 1952, USA) draws on pulp-cultural detritus in his paintings, drawings, sculptures and installations. From junk stores, B-movies, video games, comics, to Christian cults and iconography, Shaw employs these disparate visual languages of American subcultures to appeal to a collective unconscious, offering a subversive interpretation of American society.

The exhibition has been curated by Iben la Cour