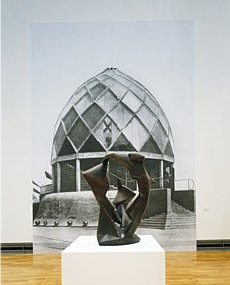 Pedestrian Zone
The notion of a dialogue between architecture and sculpture, as put forward in the exhibition ArchiSculpture with regard to past centuries, provides the conceptual background for a project that explores the issue within a contemporary urban context. The focus of investigation is Wolfsburg, whereby the city’s pedestrian zone in particular serves as a projection surface. Using information gained from their own research, architecture students from the TU Braunschweig were invited to develop ideas and designs for the creation of a “pedestrian zone" in the museum Lounge. Wolfsburg’s pedestrian zone is a conglomerate entity that consists of space, forms and signs embedded in a mesh of interrelated activities. Its external appearance is characterized by commercial strategies of persuasion in the form of logotypes and symbols. The spatial arrangement of buildings, intersecting streets, squares and arcades determines the flow of movement between the “Nordkopf" and the “Sudkopf" - the top and bottom ends of Wolfsburg’s pedestrian zone. Movement and rhythm; shop windows, facades and “street furniture"; sounds and colours; traffic junctions and open squares are just some of themes that can be experienced in the Lounge installation.

ArchiSculpture: Dialogues between Architecture and Sculpture from
the 18th Century to the Present Day

The reciprocal relationship between sculpture and architecture is one of the most exciting artistic phenomena of the 20th century. From its inception in the 19th century, modern sculpture has continually absorbed important new influences from architectural history, such as Aristide Maillol from Classicism or, later, the Constructivists from Gothic. Installation art in the 1970s even transformed sculpture into walk-in architecture, giving the viewer an entirely new perception of their own body. Conversely, in the 1920s architects began to base their building designs on sculptural forms. Current architecture has developed such markedly sculptural qualities that it sometimes appears to continue the history of sculpture.
ArchiSculpture, curated by Markus Bruderlin, the new director of the Kunstmuseum Wolfsburg, explores this process of mutual inspiration in striking spatial displays. Original pieces of art by outstanding sculptors are juxtaposed with models of world architecture. The exhibition includes examples of both disciplines from the past 200 years and brings together the work of around 90 artists and architects. The exhibition has been generously supported by Volkswagen Bank.