This exhibition of rarely-seen works provides an comprehensive overview his career. Four discernable periods of progression can be identified: early artworks created before 1916, works from the height of the 1916-1919 Dada era, art produced from the 1920’s through the 1960’s, and late's of the 1960’s to the 1970’s. 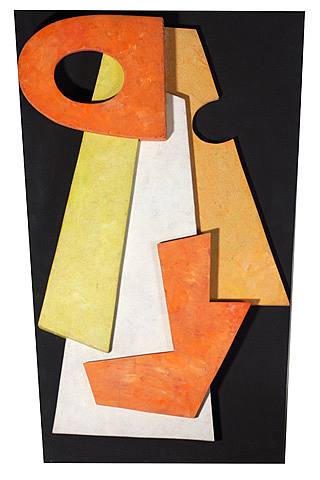 This exhibition of rarely-seen works provides an especially comprehensive overview of Hans Richter’s artistic career. Four discernable periods of progression can be identified: early artworks created before 1916, works from the height of the 1916-1919 Dada era, art produced from the 1920’s through the 1960’s, and late works of the 1960’s to the 1970’s.

Johannes Richter was born into a prominent Jewish family in 1888 Berlin. He commenced his art training at the Academy of Art in Berlin, and went on to study at the Acade'mie Julian in Paris. Developing an avant-garde style, Richter was strongly influenced by artists he met at Berlin’s Sturm Gallery, as well as the expressionistic work of Die Brucke and the Blaue Reiter groups. His deeply-colored early paintings—portraits, landscapes, and urban scenes such as Workers (1912) and Flute Player (1905)—convey dramatic, mysterious themes, reflecting his contact with German Expressionism and Cubism.

During WWI, after being drafted to the German army, wounded, and discharged, Richter traveled to Zurich, where he met with two friends from Germany, Albert Eherenstein and Ferdinand Hardekopf. They introduced him to the Dada artists Hugo Ball, Tristan Tzara, Hans Arp, Marcel Janco and Richard Huelsenbeck. Richter began collaborating with this new circle, and soon became closely involved with the Dada movement. Work from this period includes woodcuts, Dada head and Co-man drawings, and abstracted portraits of his friends and associates such as his visionary 1917 Portrait of Emmy Hennings.

Consistent with his collaboration with Dada, Richter’s art from 1916-1919 is particularly inspired by the relationship between music and visual expression. In his 1917 painting Study for Orchestra, Richter’s abstract brushstrokes reflect the sinuous patterns of musical compositions. This early interest in rhythm and movement would serve as a basis for many later works, including his “Rhythmical Scroll" series of the 1940’s.

Furthering his predilection for conceptual art by working with new technologies, in the 1920’s Hans Richter began working with Viking Eggeling to produce abstract films. Several of these groundbreaking films will be screened at Maya Stendhal Gallery, including Rhythm 21 (1921), Film Study (1926), Ghosts Before Breakfast (1927) and Dadascope (1961). Censored by the German government during the Nazi regime as “degenerate art," these films are now considered classics of early avant-garde cinema.

Richter’s manipulation of film speeds, and experimentation with camera movements and rapidly-spliced shots were revolutionary progressions in cinema, shocking and delighting audiences. The films in this exhibition have been transferred to DVD from their original
16 mm format from Jonas Mekas’ personal collection at Anthology Film Archives, NYC.

Following the outbreak of World War II, Richter left Europe and immigrated to America; there, he founded the Film Institute of City College, New York, where he remained a supervisor and professor for 14 years. During this time, he collaborated with his old friends, art world intellectuals such as Marcel Duchamp, Fernand Leger, Alexander Calder, and Man Ray. Films from this period include Dreams That Money Can Buy (1947) and 8 x 8: A chess Sonata in 8 Movements (1957).

Early on in his career, Richter developed and propagated ideas on art based in a “Universelle Sprache"—universal language—free of national frontiers, and comprehensible to all people. He continued to base his visual aesthetic in this concept, using flowing brushstrokes, and organic, geometric shapes in his and Dymo (Dynamic Movement) and Vibra (Vibrations) series of the 1970’s. The Dada Head wood reliefs from this decade were based in drawings made as early as 1918—both of which are on view in the exhibition.

Richter’s later paintings reveal a continued fascination with structural harmony, such as that in music. Towards a Perfect Painting (1943) and the “Simple Gestures" series from the 1960’s, which draws inspiration from Chinese calligraphy, reflect the artist’s interest in achieving structurally balanced compositions.

Hans Richter received several publicly recognized awards during his life, including the International Prize for Film in Venice (1947), and Art Prize of the City of Berlin (1967). He had over 158 exhibitions, wrote more than 23 books, and produced, directed or wrote some 30 films. He worked constantly until his death, in Switzerland in 1976.

The exhibition at Maya Stendhal gallery provides a unique opportunity to view an expansive range of Hans Richter’s artworks—films, paintings posters, original documents, lithographs, work-studies and sculptures by the visionary whose work continues to resonate and influence art today.