The Phillips Collection, America’s first museum of modern art, Klee and America will explore the rise of Klee’s American success and artistic legacy from the 1920s through the 1950s. It will reveal the reasons behind the enthusiasm for Klee in the United States, which provided not only his most attentive audience but also a safe haven for his theories of artistic freedom, self-invention, and authenticity. 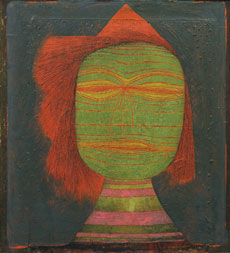 Washington, D.C.—German artist Paul Klee (1879-1940) was one of Europe’s most internationally esteemed artists when the Nazi regime condemned his art in the early 1930s. At the same time, admiration for Klee swelled in America as his works increasingly entered the collections of major museums and private collectors. From June 17 to Sept. 10, 2006 at The Phillips Collection, America’s first museum of modern art, Klee and America will explore the rise of Klee’s American success and artistic legacy from the 1920s through the 1950s. It will reveal the reasons behind the enthusiasm for Klee in the United States, which provided not only his most attentive audience but also a safe haven for his theories of artistic freedom, self-invention, and authenticity.

Unlike other European modern artists, Klee was never enraptured with American popular culture. By the same token, Americans remained largely dispassionate about the work of Swiss-born Klee when it was first introduced to the United States in the 1920s. By the end of the decade, only two major private Klee collectors existed in the country, Galka Scheyer in California and Katherine Dreier in New York. In 1924, critic Henry McBride underscored the enigmatic nature of Klee’s work, describing him as “that strange meteor from Switzerland" on the pages of the New York Herald.

Klee and America will comprise approximately 80 works by Klee, including drawings, watercolors, and paintings spanning his entire career that were collected in America from the 1920s to the 1950s. The works are drawn from public and private collections throughout the United States and include those once owned by artists like Tobey and Calder, and authors Clifford Odets and Ernest Hemingway, among others.

This special exhibition will be the first to reside in The Phillips Collection’s new gallery spaces in the Sant Building, opened in April 2006. The installation of Klee and America will include a separate room dedicated to the Phillips’ 13 works by Klee, reestablishing the intimate enclosure originally created in the Klee Room. One of the cornerstones of The Phillips Collection, the Klee Room was in existence for more than 30 years between 1948 and 1982 and was an abiding source of inspiration to the artists of the post-war generation. Kenneth Noland in particular spent many hours in the room after he moved to D.C. in 1950, viewing such works as Picture Album, Arab Song, and Young Moe.

Josef Helfenstein, director of The Menil Collection, is the curator of Klee and America. Coordinating curator at The Phillips Collection is Elizabeth Hutton Turner, senior curator. The exhibition premiered at the Neue Galerie in New York from March 9 to May 22, 2006, and will be at The Menil Collection from Oct. 6, 2006 to Jan. 28, 2007.

Published by Hatje Cantz in collaboration with The Menil Collection, the Klee and America catalogue includes seven essays that chart Klee’s rise in America from his first transatlantic exchanges in the 1920s, to his breakthrough in the mid-1930s, and finally to his impact in the 1940s and 1950s. The book also features more than 90 color plates, as well as catalogue entries, a chronology of events, and an index of selected American collectors.

It is co-edited by Josef Helfenstein and Elizabeth Hutton Turner, who also contributed essays. WHEN WE WERE YOUNG: NEW PERSPECTIVES ON THE ART OF THE CHILD Klee held a deep interest in children’s art, which he considered a rich resource for his own creativity and inspiration. This accompanying exhibition to Klee and America features approximately 30 contemporary children’s drawings alongside examples of childhood drawings by Klee and Picasso juxtaposed with their mature work. By bringing these works together, the exhibition will re-examine conventional notions of what it means to be artistically gifted and shed new light on the relationship of drawing to creative thinking in children. Conventional views of prodigious talent in art—usually referencing the early adolescent works of Picasso—have typically focused on skills of mastering perspective and rendering three-dimensional form. This exhibition expands an understanding of the aesthetic merits of children’s drawings and explores the genesis of Klee and Picasso, two great artistic prodigies.

When We Were Young: New Perspectives on the Art of the Child is curated by Jonathan Fineberg, Gutgsell Professor of Art History at the University of Illinois at Urbana-Champaign. The coordinating curator at the Phillips is Elizabeth Hutton Turner, senior curator. The exhibition is supplemented by a book, co-published by The Phillips Collection Center for the Study of Modern Art, the Illinois at the Phillips program, and the University of California Press. It includes an introduction and essay by Fineberg on child’s play and the origins of art, an essay by Rudolf Arnheim on child styles, an essay by Turner on aspects of drawing and play in the early work of Alexander Calder, and essays by experts on contemporary child art.

Fascinated by the way young people played with line and form in their drawings, Klee inhabited line with his own imagination, a process he described in his Pedagogical Sketchbook as “an active line on a walk, moving freely without goal." Using this phrase as a point of departure, a symposium on June 17 from 2-4 p.m. will center on Klee’s works and how his drawings relate to imagination, play, and children’s art. A panel will present research illustrating these topics, and a moderated discussion will follow, focusing on the concept of giftedness in adult and children’s art and questioning the relationships between the two.

Panelists include Dr. Jonathan Fineberg, Gutgsell Professor of Art History at the University of Illinois at Urbana-Champaign and curator of When We Were Young; Dr. Josef Helfenstein, director of The Menil Collection and curator of Klee and America; Dr. Michael Baumgartner, curator of the Paul Klee Museum in Bern, Switzerland; Dr. Christine Marme' Thompson, education specialist in child art at Pennsylvania State University; and Dr. Ellen Handler Spitz, professor in the Honors College at the University of Maryland, Baltimore County. The symposium will be moderated by Phillips Senior Curator Dr. Elizabeth Hutton Turner.

In conjunction with Klee and America, The Phillips Collection has invited teachers nationwide to participate in a Summer Teacher Institute from June 26-30, 2006. This five-day interdisciplinary initiative will enable K-12 educators to study in depth Klee’s life, subject matter, style, and process. Through interactive workshops, art programs, and other activities, the 50 educators that have been selected will explore how Klee’s extraordinary art, revolutionary style, and fascinating history can inspire students. Within the Phillips’ new educational facilities and exhibition galleries, teachers will also explore cross-curriculum connections between Klee’s work and social studies, foreign language studies, music, and the performing arts. For more information, please contact (202) 387-2151 x214 or pruther@phillipscollection.org.

ABOUT THE PHILLIPS COLLECTION

The Phillips Collection, America’s first museum of modern art, is home to one of the finest collections of impressionist and modern American and European art in the world, with nearly 2,500 works by artists including Daumier, Renoir, Bonnard, Matisse, Monet, Degas, van Gogh, Ce'zanne, Picasso, Braque, Klee, O’Keeffe, Lawrence, Dove, Avery, Diebenkorn, and Rothko. The museum was founded by Duncan Phillips and opened in 1921. Founded by Duncan Phillips and opened to the public in 1921, the museum comprises Phillips’ 1897 Georgian Revival home and two similarly scaled additions that retain the intimacy of a private residence.

The Phillips maintains an active collecting program and regularly organizes major special exhibitions in addition to maintaining a program of traveling exhibitions and making its works available to audiences around the world through loans to other museums. The museum also produces award-winning and in-depth education programs, with an active schedule for K-12 teachers and students, as well as for adults. Since 1941, the museum has hosted weekly concerts in its wood-paneled Music Room installed with modern masterpieces.

The Phillips Collection is located in the heart of Washington’s historic Dupont Circle neighborhood, at 1600 21st Street, NW, near the Dupont Circle Metro (Q Street exit).

Phillips Collection
1600 21st Street - Washington
Opening Hours: Museum hours are Tuesday through Saturday 10 a.m. to 5 p.m.; Thursday Artful Evenings until 8:30 p.m.; Sunday from noon to 7 p.m. (noon to 5 p.m. June through September). Closed Monday.
Admission: $12 for adults, $10 for visitors 62 and over and students.