From Painting to Architecture. Works from the years 1914-1920 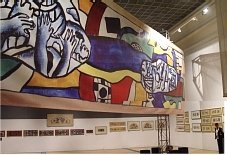 From Painting to Architecture

The idea behind the exhibition Fernand Leger. From Painting to Architecture is to present the artist’s path of development - from easel paintings to achievements in the area of scenography, cinema, architecture, monumental painting and fabrics.

We show, in a chronological order, works from the years 1914-1920; we mention - through letters and drawings - the period of I World War, which Leger spent in the trenches and which had a profound influence on his later work. The twenties, when Leger was fascinated with modernity, have been illustrated by such paintings as Breakfast or The Red Wheel and projects of decorations and costumes of Swedish Ballets (Skating Rink, La Creation du Monde), as well as Leger’s famous film - Le Ballet mecanique - the first film without a script, based on contrasting images and rhythm, foreshadowing the surrealists. We present his first achievements in the area of murals art in the years of 1925-1935, when Leger was working with the renowned French architect Robert Mallet-Stevens and the famous Le Corbusier. The years 1940-1955 are illustrated with projects of the great architectural productions, such as the mosaics in the churches of Assy (1946) and Basto gne (1950), or the stained glasses of the Audincourt church (1951).

The exhibition presents works made in different techniques: oil on canvas, gouache, drawing and fabric. Scenography models and archival manuscripts serve as a valuable supplement to the presentation of the plastic works.

Fernand Leger is presented to the Polish public in the frame of the Zacheta Gallery programme aimed at popularising eminent artists of the 20th century. Fernand Leger artistic work also found a strong response in Poland, for example in Lvov’s artistic group Artes. Leger’s associate and, after II World War his wife, was the painter Nadia Khoddasevitch (Wanda Chodasiewicz-Grabowska), associated with Polish artistic circles.

The exhibition is accompanied by a rich educational programme, including a conference, discussions, lectures and workshops for adolescents, children and whole families. A 150 pages long Polish/French catalogue with colour illustrations will serve as a valuable documentation of the exhibition. It includes interesting texts e.g. about above mentioned influence of Leger’s art in Poland by Andrzej Turowski and Jola Gola.

The exhibition was organised in cooperation with Musee National Fernand Leger de Biot, Bibliotheque Nationale de France and Centre Pompidou, with financial assistance from the French Embassy and Institut Francais de Varsovie. Co-financed by Ministry of Culture and National Heritage of the Republic of Poland.