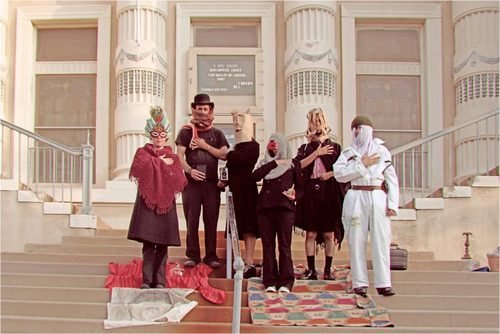 LAXART is proud to announce Vast Arcade Los Angeles, a new installation by Los Angeles based artist Arturo Ernesto Romo. The installation features site-specific wall drawings, texts and posters by the artist, video and sculptures—as well as manufactured trinkets and candles that make up, in the artist’s own words, the “diluvial all-overness" of his art practice.

Romo keeps a “live’ sketchbook on his artist website ( http://www.revumbio.com ), and this installation’s source material was originally “sketched" as the “Magical Transfiguration Page" one small section of his almost labyrinthine site. The strategies that propel the web sketchbook and the installation for LAXART are both poetic and conspiratorial. They are driven by free association and Romo’s own vast arcade of visual and discursive materials: from 19th century French photographer Nadar to 21st century Chicano photographer Harry Gamboa Jr., from medieval alchemists to Frank Zappa’s concoction of the band Ruben and the Jets, and from sprawl architecture to terrorism.

KALUP LINZY: ALL MY CHUREN
Curated by Malik Gaines

LAXART is pleased to present the first solo exhibition in LA of New York based artist Kalup Linzy, curated by LAXART Adjunct Curator, Malik Gaines. The conventions of television soap operas become a hilarious and insightful psycho-sexual playground for New York-based artist Kalup Linzy, as he turns this most mundane form inside out with his series of clever videos, “Conversations wit De Churen." In one of the first episodes, “All My Churen," we meet a cast of emotionally on-the-edge characters that inverts the typical family structure of daytime melodrama, offering a view of class, race, sexuality, and hyperbolic personal conflicts that the major networks’ corporate advertisers would shun. In Linzy’s version of “the stories," wealth is replaced with realness, deliberate dialogue is replaced with a heightened black vernacular, and formulaic control is replaced with moments of delirious mess.

Lovett/Codagnone’s performance is made possible with the generous support of Emi Fontana, West of Rome Inc.

About LAXART:
Responding to Los Angeles’ cultural climate, LAXART questions given contexts for the exhibition of contemporary art, architecture and design. With a renewed vision for the potential of independent art spaces, LAXART provides a center for interdisciplinary discussion and interaction and for the production and exhibition of new exploratory work. LAXART offers a space for provocation, dialogue and confrontation by practices on the ground in LA and abroad. LAXART is a hub for artists based on flexibility, transition, spontaneity and change. The space responds to an urgency and obligation to provide an accessible exhibition space for contemporary artists, architects and designers.