The exhibitions highlights artworks that are made to actually have a paranormal effect on the world, including spells, talismanic objects, and apparitions conjured and transcribed. The show assembles works by more than 20 internationally artists. Extending the show to Times Square, Euan Macdonald's video portrait of a healer will simultaneously offer its subject's positive psychic effects to the wider public on the last minute of every hour on The 59th Minute. 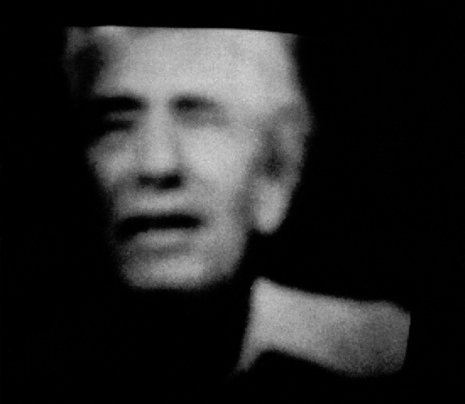 Co-curated by Laura Hoptman and Peter Eleey, the exhibition will be presented on the second floor of an East Village building, rumored to be haunted, Thursday and Friday (4-7pm), Saturday and Sunday (noon-7pm) from July 20 through September 17, 2006, with an opening reception on Wednesday, July 19, 6-7:30pm. Extending the show to Times Square, Euan Macdonald's video portrait of a healer will simultaneously offer its subject's positive psychic effects to the wider public on the last minute of every hour on The 59th Minute: Video Art on the NBC Astrovision by Panasonic.

PAWEL ALTHAMER (b. 1967, Warsaw, Poland) lives and works in his native Warsaw. In 2004, the Bonnefantenmuseum of Maastricht awarded Althamer the Vincent van Gogh Biannual Award of Contemporary Art in Europe. His solo exhibitions include Kunstveiren fur Rheinlande und Westfalen in Dusseldorf, and Galerie Neugerriemschneider in Berlin. Althamer appeared in the Poland Pavilion at the 2003 Venice Biennial, as well as at the 54th Carnegie International and the 4th Berlin Biennial earlier this year.

ARTUR ZMIJEWSKI (b. 1966, Warsaw, Poland) Alongside Pawel Althamer, Artur Zmijewski studied under Professor Gregorz Kowalski at the Academy of Fine Arts in Warsaw, Poland. Zmijewski works exclusively with photography and film, often taking the position of an observer of human behavior, provoking and studying unusual situations. The artist represented Poland at the 2005 Venice Biennial and was included in the 2002 Liverpool Biennial. Zmijewski lives and works in Warsaw.

JAMES LEE BYARS (1932-1997), who was born in Detroit and died in Cairo, is celebrated for his wide-ranging practice that combined elements of Fluxus, Minimalism and Conceptual art. James Lee Byars: Life, Love and Death, a large retrospective of Byars’s work, was organized by Schirn Kunsthalle Frankfurt in 2004, and shown in a smaller form at the Whitney Museum of American Art later that year. The Rest Is Silence, a collection of concurrent solo exhibitions spread between the Perry Rubinstein, Mary Boone, and Michael Werner galleries in New York, was held this spring.

SOPHIE CALLE (b. 1953, Paris, France) lives and works in Paris. She is well known for the voyeuristic and sleuth-like tendencies that often characterize her photographic and installation-based practice. In 2005, she was included in the 8th Lyon Biennial, where she first showed Ou' et Quand. The Centre Pompidou held a major retrospective of her work in 2003. She will be representing France at the 2007 Venice Biennale.

FABIO BALDUCCI (b. 1964, Italy) Lives and works in Paris. Balducci is most known for his performance work with French performance artist, Marie Cool. Since 1995, Balducci and Cool have collaborated on a number of works including Attitudes, Public and Home. Their recent work, Untitled (Prayers) 1996-2005, was commissioned for the National Review of Live Art, Glasgow, Scotland. Recent performances have been performed at the South London Gallery, London, England (2005); the Ikon Gallery, Birmingham, England (2004); and E'cole Nationale Supe'rieure des Beaux-Arts, Paris, France (2004).

THE CENTRE FOR TACTICAL MAGIC is a collective based in the San Francisco Bay Area that produces community-based projects using latent energies to encourage positive social transformation. Tactical Magic is an amalgam of disparate arts invoked for the purpose of actively addressing power on individual, communal, and transnational fronts. This past June, the Center’s Tactical Ice Cream Unit was invited to participate in the World Urban Forum in Vancouver, Canada.

ANNE COLLIER (b. 1970 Los Angeles, CA) lives and works in New York. She was included in both Greater New York at P.S.1/MoMA (2005) and the 2006 Whitney Biennial. Collier has had solo exhibitions with Jack Hanley in San Francisco, Mark Foxx in Los Angeles and Corvi-Mora in London, and will be showing at Presentation House, Vancouver next year.

CHRISTIAN CUMMINGS lives and works in Los Angeles. Last year his work and performances were featured throughout a number of museum shows including at the Museum of Jurassic Technology in Culver City, CA; and the Hammer Museum, Los Angeles. Last year, his recent se'ance project, Ghost Drawings, was presented at the Santa Monica Museum of Art, Santa Monica, CA in connection with an exhibition of the drawings of Hilma af Klint, Emma Kunz, and Agnes Martin.

TRISHA DONNELLY (b. 1974, San Francisco, CA) Trisha Donnelly lives, works and teaches in San Francisco. Donnelly was most recently included in the 2006 Whitney Biennial and the 4th Berlin Biennial for Contemporary Art, as well as the 54th Carnegie International and Creative Time’s The Plain of Heaven (2005).

DOUGLAS GORDON (b. 1960, Glasgow, Scotland) is the recipient of numerous international art prizes, including the Turner Prize (1996), the Venice Biennale’s Premio 2000 (1997), and the Hugo Boss Prize (1998). This year, Douglas’s work appears at the Fundacio' Joan Miro' in Barcelona, Spain and the National Gallery in Edinburgh, Scotland. Timeline, a retrospective exhibition of Gordon’s film-based work, is at the Museum of Modern Art in New York through September. Gordon lives and works in New York.

BRION GYSIN (1916-1986) Closely associated with William S. Burroughs and the Beat movement, Gysin spent his life working as an artist, writer, and poet. Gysin is best known for his rediscovery of Tristan Tzara’s cut-up technique, which William Burroughs eventually appropriated into his own work. In 1959, Gysin invented, with Ian Sommerville, the “Dreamachine," a device intended to simulate lucid dreaming through the projection of light patterns on users’ eyelids.

FRIEDRICH JURGENSON (1903 - 1987) Though he worked as a painter and film director, Friedrich Jurgenson is best known as the pioneer of Electronic Voice Phenomena (EVP). An initial field recording of local birdsongs, fueled by a passion for ornithology, led him to a 28-year study of what he believed were spirits communicating with us through sound recording technologies. He continued his work searching the origins of his voices that he believed to be deriven from the hypothetical afterlife until his death in Sweden in 1987.

CARL MICHAEL VON HAUSSWOLFF (b. 1956, Linkoping, Sweden) lives and works in Stockholm, Sweden. He has been one of the two rulers of the imaginary kingdom of Elgaland-Vargaland—consisting of “the Border Territories: Geographical, Mental & Digital"—since its inception in 1992. A composer, visual artist, and curator, von Hausswolff has explored the intersections between radio frequency, electricity, and the paranormal. Hausswolff has become an expert on the work of his friend Friedrich Jurgenson, and is the Chairman of the Friedrich Jurgenson Foundation. He has been featured several times at the Venice Biennial (2001, 2003 & 2005), as well as in major exhibitions including documenta X (1997); Sound Art-Sound as Media, ICC, Tokyo (2000); and Portikus, Frankfurt (2004).

JOACHIM KOESTER (b. 1962, Copenhagen, Denmark) has solo exhibitions this year at Paris’s Palais de Tokyo; the Centre d’Art Santa Mo'nica in Barcelona, Spain; and Lunds Konsthall in Sweden. Koester recently exhibited Sandra of the Tuliphouse or How to Live in a Free State (with Matthew Buckingham, a frequent collaborator) at The Kitchen, NY (2005). At last year’s Venice Biennale, his work was featured in the Danish pavilion. Both a photographer and filmmaker, Koester lives and works in Copenhagen and New York.

JIM LAMBIE (b. 1964, Glasgow, Scotland) was nominated for the 2005 Turner Prize, and was featured in the 2005 Lyon Biennial and the 54th Carnegie International. His recent solo exhibitions include P.I.L at Mizuma Art Gallery, Tokyo; The Byrds at The Modern Institute, Glasgow; and Mental Oyster at Anton Kern Gallery, New York. He is currently the subject of a solo show at the Hirshhorn Museum & Sculpture Garden, Washington D.C until October. Lambie lives and works in Glasgow, Scotland

MIRANDA LICHTENSTEIN (b. 1969 New York, NY) Lichtenstein’s most recent solo exhibition was held earlier this year as part of the Hammer Project Series at the Armand Hammer Museum in Los Angeles. In 2005, The Searchers, another solo exhibition, appeared at the Elizabeth Dee Gallery in New York, Gallery Min Min in Tokyo, and the Mary Goldman Gallery in Los Angeles. Lichtenstein lives and works in New York.

EUAN MACDONALD (b. 1965, Edinburgh, Scotland) lives and works in Los Angeles. He was included in Ralph Rugoff’s Irreducible: Contemporary Short Form Video at the CCA Wattis Center for Contemporary Art, San Francisco (2005) and Treble at Sculpture Center, New York (2005). Euan’s work has been shown extensively since 1996. His video Healer, included in Strange Powers, runs on the Panasonic screen in Times Square as part of Creative Time’s 59th Minute program concurrent with this exhibition.

JONATHAN MONK (b. 1969, Leicester, England) lives and works in Berlin, Germany. Earlier this year, Monk’s solo exhibition Yesterday, Today, Tomorrow, etc. traveled from the Kunstverein Hannover to Kunsthalle Nurnberg and the Kunstmuseum St. Gallen, Switzerland. A major exhibition of his work was shown at the ICA London in 2005. In 1997, he and Toby Webster organized Work in progress and or finished at Ubermain in Los Angeles, which included an earlier version of Douglas Gordon’s contribution to Strange Powers.

SENGA NENGUDI (b. 1943, Chicago, IL) teaches at the University of Colorado, where she lives and works. Currently a resident at the Fabric Workshop and Museum in Philadelphia, Nengudi had a solo exhibition at the Thomas Erbern Gallery, New York, last year, and participated in group exhibitions at the Santa Fe Art Institute and the Contemporary Art Museum, Houston, as well as the 54th Carnegie International.

PAUL PFEIFFER (b. 1966, Honolulu, HI) lives and works in New York. His recent exhibitions include Superstars at Kunstalle Wein, Vienna (2005) and Marking Time - Moving Images at Miami Art Museum, Miami, FL (2005). In 2003, a traveling retrospective of his work was organized by the MIT List Visual Arts Center and the Museum of Contemporary Art, Chicago. Pfeiffer’s latest curatorial project (with Anthony Huberman), Grey Flags, was on view at Sculpture Center, New York through the end of July.

EVA ROTHSCHILD (b. 1972, Dublin, Ireland) was most recently included in the Tate Triennial: New British Art, Tate Britain, London. Last year, she participated in the touring group exhibition BRITISH ART SHOW 6. In 2004, Kunsthalle Zurich held a solo exhibition of Rothschild’s work, and she was included in the 54th Carnegie International. She has a show with 303 Gallery, New York planned for 2007. The artist lives and works in London, England.