And Yet It Moves!

John Heartfield, Gardar Eide Einarsson, Bjorn-Kowalski Hansen, Lisa Kirk, Mark Titchner. All the artists in this exhibition use different ways to address the ineffectiveness of the avant-garde, and the role of socialist utopias. The selected artists form an overlapping area between ''real'' action-oriented interests, and pure aesthetic elements. 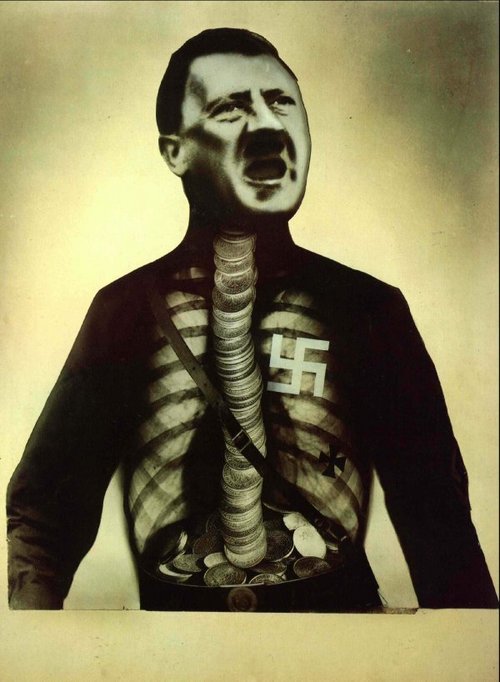 This title, taken from one of John Heartfield’s montages, is just one example of Heartfield’s striking use of language. Like all Heartfield's works this title contains an energy that recalls the great potentials of his time, in art, science and politics, as well as the expectations that these potentials produced. In this exhibition I am taking John Heartfield as a reference to explore how the political motivation of the dada and surrealist movements relate to contemporary artists and identifying questions that this collision creates. In today’s political climate how does the montage and satire tradition of the 20s and 30s appear to us? Are these contemporary artists just producing “melancholy", or are these works intended, as Heartfield’s were, to form a basis for future “revolutionary activity"?

A work by John Heartfield will be presented alongside contemporary artists Mark Titchner, Lisa Kirk, Gardar Eide Einarsson, and Bjorn-Kowalski-Hansen. In the context of MOT, an artist-run exhibition space in East London housed in a building set up by the Greater London Council, the project will seek to address questions concerning the use of socially-related aesthetics, and play with the ubiquitous term “not for profit".

Mark Titchner’s works link visually to workers’ union banners of the 20s and 30s, with his slogans expressing a similar energy to that of Heartfield. Unlike Heartfield’s work, Titchner’s also contains ambiguous elements. His works refer simultaneously both to union banners and to contemporary corporate slogans. The intense visual elements in his works stand in sharp contrast to the work’s empty and contradictory lines of text, for example “We Want Trust and Integrity". What immediately appears like a meaningful and direct statement soon proves to be emptied of specificity and direction. Yet, in spite of these apparent contradictions, the complexity and energy of Titchner's work prevent the slogans from becoming neutral or indifferent. It is clear that Titchner’s work wants to tell us something. Working out what that could be is the difficult bit.

Lisa Kirk’s “Revolutionary" projects also comment on the existence of aesthetics that seem to use socially engaged thoughts. Her tongue-in-cheek projects focus on “revolutionary" ideas but also contain a convincing energy that insists on being “revolutionary". This urgency combined with entertaining elements, such as in the smelly “revolutionary fragrance" project, Kirk demystifies the idea of revolution, and suggests a new reading of radicality. Kirk also attempts to decode our bourgeois culture by using the language of advertising, and seek to reveal how "radical chic" is used as a propaganda tool for the market economy. Lisa Kirk will create a new montage-related work for this exhibition.

Playing with the notion of the failed avant-garde, and its powerlessness, Gardar Eide Einarsson’s works also bring to mind socialist aesthetics. Half-burned and with graffiti-style texts, his posters look like they come directly from an anti-war, or anti-capitalist demonstration, but on closer inspection one can see that they have been meticulously fabricated to look like they have just seen some real action. Gardar Eide Einarsson’s works use sparse and often bleak visual elements. He does not give us a colourful image of radical subcultures, but instead underlines the artworld's distance to these social worlds. For this exh. Einarsson will present the video "Untitled (Chickens)".

As a contrast to the other artists in this exhibition Kowalski-Hansen has a hands on approach to art making. Kowalski-Hansen relates to Heartfield’s less known activist side. Heartfield wanted his works to be available to a wide public with a specific political purpose, he took part in founding the German Communist Party. But unlike Heartfield, Kowalski-Hansen is not a member of any political party. Kowalski-Hansen makes socially aware businesses, as art projects and he wants, with a reverse reading of the anti-globalization book “No Logo" by Naomi Klein, to create responsible and socially engaged business models that can create a notion of positivity. His economical experiments aim to be a negation of what can be seen as multi-national companies’ lack of empathy and responsibility for local communities. Kowalski-Hansen works within the system of the market economy, and at the same time he is questioning and ironizing over the same system. For this exhibition Kowalski-Hansen will present a new project.

All the artists in this exhibition use different ways to address the ineffectiveness of the avant-garde, and the role of socialist utopias. The selected artists form an overlapping area between ''real'' action-oriented interests, and pure aesthetic elements. One common factor of the artworks in this exhibition is that, in spite of their ironic and ambiguous elements, they still express urgency. The straight-forward, almost easy way these artists lay out the problem of the avant-garde does not only produce new "melancholies", but also suggests that the problem of the avant-garde is getting ready for a re-reading, or a new approach.