The Economy of the Imaginary: Pirates and Heroes 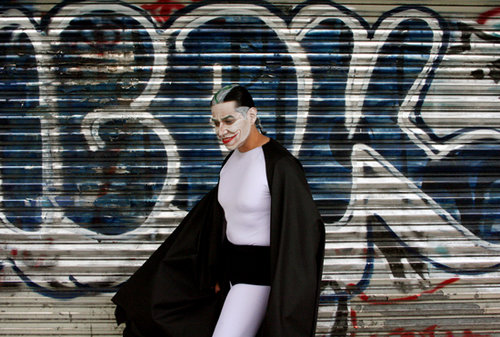 The Economy of the Imaginary: Pirates and Heroes

For her first U.S. solo exhibition Minerva Cuevas presents The Economy of the Imaginary: Pirates and Heroes, a new, 5-channel video installation that uses cinematic projections to play with the formal conventions of popular comics. Cuevas researched the history of the Hollywood film industry, particularly its superheroes, social heroism, piracy dynamics, and the public domain to create this piece, which features Salvia, Capital, Imperio, Oscar and Liberdade: five characters who speak about Thomas Alva Edison, the economy, heroism, defeat and human fantasies. Actors playing these characters were selected from those who responded to calls for auditions reading “Se buscan superheroes (Looking for superheroes)" that were published in newspaper ads and distributed in fliers throughout various parts of Mexico City. Actors attending the audition dressed in superhero costumes were interviewed about their superpowers, and asked to respond hypothetically to the idea of a Mexican superhero.

Born in 1975 and working in Mexico City, Minerva Cuevas is interested in informal economies and is known for projects that are based on context-specific social research and an adept use of a wide array of media and artistic approaches. As such her work leads the viewer freely into the social sphere and its surrounding aesthetics. Her past exhibitions include: Sharjah Biennial 7 (2005); Not Impressed by Civilization, Walter Phillips Gallery, The Banff Centre (2005); Populism, Contemporary Art Centre. Vilnius, Frankfurter Kunstverein, Stedelijk Museum (2005); Biennale of Sydney (2004); Hardcore, Palais de Tokyo (2003); 8th Istanbul Biennial (2003); MVC-Biotec, Secession (2001). Many of her projects are documented on her website: http://www.minervacuevas.org

Outpost for Contemporary Art is a Los Angeles-based non-profit organization devoted to international cultural exchange and a social setting conducive to lively discussion in contemporary art.

Generous support for the exhibition is provided by La Coleccio'n Jumex.

Gallery Talk: Wednesday, October 4, 7:00 p.m.
Bull## and Truth: Superhero Mythology and the Manufacturing of Identity, an illustrated lecture regarding the connections between comics and contemporary art by Amy Pederson, Ph.D., UCLA and Assoc. Professor, Woodbury University