One of Australia’s most influential and respected painters Juan Davila will be presented in a new light this spring at the Museum of Contemporary Art, with a major solo exhibition spanning thirty years of artistic practice. 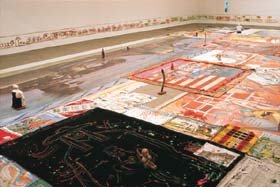 One of Australia’s most influential and respected painters Juan Davila will be presented in a new light this spring at the Museum of Contemporary Art, with a major solo exhibition spanning thirty years of artistic practice.

Juan Davila opens 9 September 2006 and features seminal works such as Davila’s epic 1980s murals, rarely seen Chilean pieces and new work created specifically for the show. The Chilean-born artist, who relocated to Australia in 1974, is a passionate advocate for art’s role to debate issues of social and political significance. Davila’s complex, beautiful and challenging paintings are known for their thorough interrogation of cultural, sexual and social identities, within an international context.

Incorporating text, found objects, appropriated imagery, photography and other media Davila’s paintings represent insightful critiques of themes including the Australian political system, the cultural aspects of late capitalism, the structures of the art world and sexuality. More recently, Davila addressed the treatment of refugees in Australian detention centres in a series of nightmarish ‘Woomera’ landscapes referencing the suffering of detainees.

Internationally recognised for his innovation in painting, Davila is represented in every major public collection in Australia, as well as New York’s Metropolitan Museum of Art and the Museo Extremeño e Iberoamericano de Arte Contemporáneo in Spain. He has exhibited widely throughout Australia, South and North America and Europe and was included in the 1982 and 1984 Biennale of Sydney.

A substantial monograph devoted to the artist, co-published by Melbourne University Publishing, will be released to accompany the exhibition, including full colour plates of over 150 works. The beautifully produced book features a powerful selection of paintings, installations and works on paper from the early 1970s to the present, as well as a selection of the artist’s incisive essays and written commentary on key works. Newly commissioned texts by British curator and critic Guy Brett and Australian art historian and curator Roger Benjamin examine the contexts and development of Davila’s work, indicating the scope and sources of his art in Latin American popular culture, Australian visual culture, the history of art and political history.

Juan Davila is an MCA National touring exhibition and will show at the National Gallery of Victoria International from 30 November 2006 to 4 February 2007. Juan Davila is represented by Kalli Rolfe Contemporary Art.