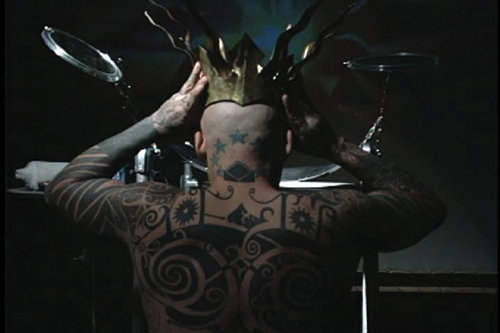 Western Project is pleased to present the first solo exhibition by Ron Athey. As one of the most important performance artists in the last twenty years, his work has influenced a generation of younger artists. Athey nose-dives into subjects and content which are visceral, challenging and difficult - the corporeal flesh, its possibilities and the knowledge it can reveal. His work can be traced from the historic lineage of Herman Nitsch, the Vienna Action Group, Leigh Bowery and Amy Semple McPherson. The exhibition includes:

"Ron Athey's asshole has its own place in the history of contemporary performance art. In the 1998-2000 Solar Anus, he pulls a string of pearls from the puckered orifice, decorated with an elaborate and appealingly symmetrical black sunburst tattoo. His body is both shown to be holy (inspired by a divine something, its potential transcendence forever yanked back to the immanence of holes and flesh) and enacted as a picture - but of what? Saying "queer body" or "queer subject" is not enough."

In Ron Athey's Video Stills, intimate 5x7 photographic works, narratives unfold into quite different disparate directions. In the Sebastian Suspended series, Athey is martyred by Darryl Carlton and frames reveal a dissociated ecstatic. In Solar Anus, an homage to both Georges Bataille and Pierre Molinier, Athey becomes far more garish, transforming his face (and asshole) into something glamorous and unreal.

"In JC, the highest of high culture (opera) is turned inside out. The habituated body of the heterosexual matrix (exaggeratedly performed in opera) is violently wrenched from its place through the deliberate perversions of sado-masochism - the dual poles of which themselves are parodied and overturned as Athey and Snapper continually change roles."

Ron Athey is a Los Angeles-based artist and writer. He has recently shown work at the Hayward Gallery in London, and the NRLA in Glasgow. His upcoming November multi-media performance (made in collaboration with Dominic Johnson) inspired by the myth of Philoctetes, will premiere at London's Chelsea Theatre. He has previously exhibited at , and previously at the Matthew Marks Gallery, NY, The Walker Art Museum, MN, the Institute of Contemporary Art, London and numerous other institutions in France, Germany, Denmark, Croatia, Slovania, Italy, Brazil, Belgium, etc.