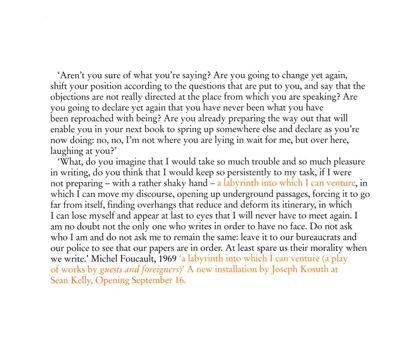 'Aren't you sure of what you’re saying? Are you going to change yet again, shift your position according to the questions that are put to you, and say that the objections are not recall directed at the place from which you are speaking? Are you going to declare yet again that you have never been what you have been reproached with being? Are you already preparing the way out that will enable you in your next book to spring up somewhere else and declare as you’re now doing: no, no, I’m not where you are lying in wait for me, but over here, laughing at you? 'What, do you imagine that I would take so much trouble and so much pleasure in writing, do you think that would keep so persistently to my task, if I were not preparing- with a rather shaky hand- a labyrinth into which I can venture, in which I can move my discourse, opening up underground passages, forcing it to go far from itself, finding overhangs that reduce and deform its itinerary, in which I can lose myself and appear at last to eyes that I will never have to meet again. I am no doubt not the only one who writes in order to have no face. Do not ask who I am and do not ask me to remain the same: leave it to our bureaucrats and our police to see that our papers are in order. At least spare us their morality when we write.’ Michel Foucault, 1969

Sean Kelly Gallery is delighted to announce a major exhibition by Joseph Kosuth, the most recent addition to his twelve-year series of 'Guests and Foreigners’ installations. Constructed as an enormous labyrinth, using spaces in the gallery previously unseen by the public, the installation is a self-reflexive discourse on the artist’s own history, including many works never before seen in the United States. 'Quoted’ and embedded as part of the installation, are key early works through to new work created specifically for the exhibition which over all function as part of the text of Kosuth’s labyrinth. 'Guests and Foreigners’ has been staged at institutions worldwide: Kunstlerhaus in Oslo; The Irish Museum of Modern Art, Dublin; The Schirn Kunsthalle, Frankfurt; The Chiba Museum, Japan, and The Isabella Stewart Gardener Museum, Boston, among others.

Joseph Kosuth is one of the pioneers of Conceptual art and installation art; initiating language and photo based works and appropriation strategies in the 1960s. His work has consistently explored the production and role of language and meaning within art. His nearly forty year inquiry into the relation of language to art has taken the form of installations, museum exhibitions, public commissions and publications throughout Europe, the Americas and Asia, including five Documenta(s) and four Venice Biennale(s), one of which was presented in the Hungarian Pavilion (1993). Awards include the Brandeis Award, 1990, Frederick Weisman Award, 1991, the Menzione d'Onore at the Venice Biennale, 1993, and the Chevalier de l'ordre des Arts et des Lettres from the French government in 1993. He received a Cassandra Foundation Grant in 1968. In June 1999, a 3.00 franc postage stamp was issued by the French Government in honor of his work in Figeac. In February 2001, he received the Laura Honoris Causa, doctorate in Philosophy and Letters from the University of Bologna. In 2001 his novel 'Purloined’ was published by Salon Verlag. In October 2003, he received the Austrian Republic’s highest honor for accomplishments in science and culture, the Decoration of Honor in Gold.

Please contact Tei Carpenter at the gallery (212.239.1181) or tei@skny.com for further information.