The 14 photographic pieces in the exhibition represent Miller's intensive scrutiny of the social networking and marketing implications of the online dating phenomena; and revisit the subject of personal ads introduced in his 1987 work referencing print ads. 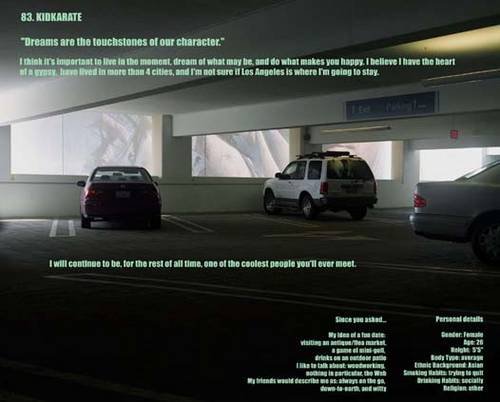 For the purpose of his project Total Transparency, John Miller was an unlikely member of the internet dating services Lavalife.com, Manline.com and Womanline.com. The 14 photographic pieces in the exhibition represent Miller's intensive scrutiny of the social networking and marketing implications of the online dating phenomena; and revisit the subject of personal ads introduced in his 1987 work referencing print ads. Miller says he participated in the web sites "to acquaint myself with the protocols of Internet dating and to see what this burgeoning trend might mean." *

Texts drawn from Lavalife.com members that live in a ten-mile radius of 90036 (West Hollywood) are superimposed on photographs (taken by Tamara Sussman) of locations in the same geographic area and range from intimate interiors (a bedroom, a bathroom) to public spaces (a parking garage, a bar). Miller has written: "Here, my thinking was that various spatial codes sanction or prohibit sexual behavior in these places…..In all the images I wanted to contrast concrete space as a social form with the symbolic social space of the online ad."*

Miller also includes a sculpture titled in the exhibition; The Corpse is an accretion of colorful plastic fruit, mirrors and miniature landscaping materials on a dome-shaped object split into eight slices. John Miller says of the work: "This piece belongs to a group of works that use the cornucopia --almost always just fruit -- as a trope. I see the aggregation of fruit as a displacement of the brown impasto motif I used in earlier work. Although a profusion of fruit is ostensibly bountiful, in some ways I find it more grotesque than a straightforward allusion to excrement. That I use plastic fruit is important too. The utopian promise of the cornucopia contrasts with the dated and tacky aspect of its elements."

John Miller lives and works in Berlin and New York where he teaches at Columbia University. One person shows include the Center for Contemporary Art, Tokyo; Kunstverien, Hamburg; DAAD Galerie, Berlin; P.S.1 Contemporary Art Center, New York; and Magasin-Centre National d'Art Contemporain, Grenoble, France. His work was included in the Whitney Biennials in 1985 and 1991 and he has exhibited regularly at Metro Pictures since 1984. A widely published writer and critic. his books include "I've been listening to depressing music lately. Maybe because I'm depressed" and "When Down Is Up."

*from a text "Total Transparency" by John Miller (available on request)