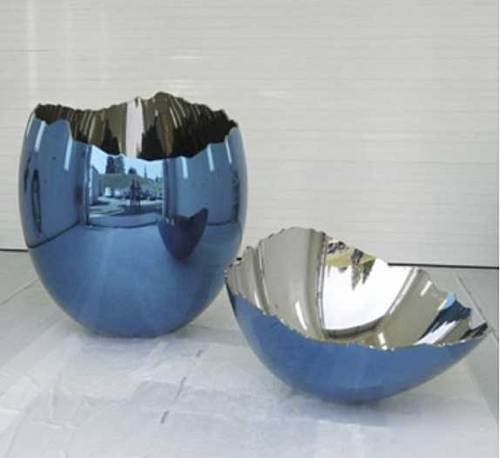 "When I was about five years old, I would go after school to this little building, like a little shelter. In the afternoons we'd make things out of Popsicle sticks. We'd work with Play-Doh. And this experience gave me my foundation. That's what I hold on to in the world. And whatever I made at that time, I know is equivalent to what I'm doing now. And that was, for me, really art."
--Jeff Koons

Gagosian Gallery is pleased to announce the exhibition of Cracked Egg (Blue) by Jeff Koons, a large, two-part stainless steel sculpture in the mythic Celebration series that he began with Balloon Dog in 1994. Cracked Egg (Blue) is a unique work and the first of five versions (including the artist's proof), each rendered in a different vivid color.

From the outset of his controversial career, Koons turned the traditional notion of the work of art and its context inside out. Focusing on some of the most unexpected objects as models for his work, from vacuum cleaners and inflatable flowers to novelty drink caddies, Koons eschewed typical standards of "good taste" in art, instead embracing conventional, distinctly American, middle-class values to expose the vulnerabilities of hierarchies and value systems. Working his way through various conceptual constructs including the new, the banal and the heavenly, Koons has evolved his work from its literal, deadpan beginnings to baroque manifestations that oscillate between abstraction, sculpture and pure spectacle.

Jeff Koons was born in 1955 in York, PA and received his B.F.A. at Maryland Institute College of Art, in Baltimore, MD. His work has been widely exhibited internationally. Recent solo shows include the Deutsche Guggenheim, Berlin (2000), Kunsthaus Bregenz (2001), the Museo Archeologico Nazionale di Napoli (2003) and a retrospective survey at the Museum of Modern Art in Oslo, Norway (2004, traveling to the Helsinki City Art Museum in 2005). Diamond (Pink), from the Celebration series, was on view at the Victoria and Albert Museum, London through September 2006. Koons lives and works in New York.