For Maria Morganti, the whole production of paintings becomes itself the pictorial matter. Her tendency is to deny narration and to exalt the chromatic element through the abstraction of existing forms, washed away by colour. 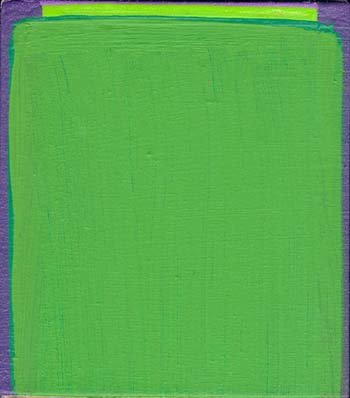 'Green paint and purple paint almost monochrome... with a narrow horizon above... layers on top of layers. Sometimes it is possible to read all layers as if they were the description of the process. Other times, the painting is finished with a last coat that covers the previous, excluding the horizon: assertions and erasures. The last layer is the memory of all choices made and of all there was.' Maria Morganti

For Maria Morganti, the whole production of paintings becomes itself the pictorial matter.
Her tendency is to deny narration and to exalt the chromatic element through the abstraction of existing forms, washed away by colour. The works are like obsessive diaries that are testimony to a process that is characterised by its own genetic rule and system of growth, recording the passage of time according to the artist's experience: the colours that the sky has had that day, the reflexes of light, the mood swings.

Morganti then re-invents and re-organises colour in a new creative act: the installation. Two or more works produced and conceived separately are associated. Placed side by side, the two entities contaminate eachother and the colours assume a new vibration as one painting finds a term of comparison in the other. In this manner, due to the presence of the other, the absolute of one becomes relative.

On the occasion of the artist's first London solo exhibition, Barbara Behan, in collaboration with publisher Maurizio Corraini, is pleased to launch Maria Morganti's book 'History of a Painting'. This book reproduces, on a 1:1 scale, the layers of colours in Morganti's painting 'Venice', (see detail above), with a documentation of colours used and a poem by Barry Schwabsky, 'Diary of a Poem', on the making of poetry.

Alongside 'Venice' there will be an installation of 20 acrylic works on paper and a selection of works on canvas recently shown at Morganti's seminal solo exhibition at the Bevilacqua La Masa Foundation in Venice. Founded as a space for young artistic research shortly after the Biennale of Venice in 1898, the foundation rapidly became a point of reference and launching pad for young artists such as Boccioni, Casorati, Semeghini, Gino Rossi and Arturo Martini, to name just a few, and continues to pursue its mission today.

In addition to her numerous international exhibitions, Morganti is currently working on an installation for the Querini Stampalia Museum in Venice and is participating in an artists' residency 'Conserving the Future' curated by Henry Meyric Hughes and Chiara Bertola in conjunction with the opening of Venice's 52nd Architecture Biennale. Morganti was recently honoured membership of the Young Artists Archives in collaboration with the Viafarini Centre in Milan and the web site Itallianarea.