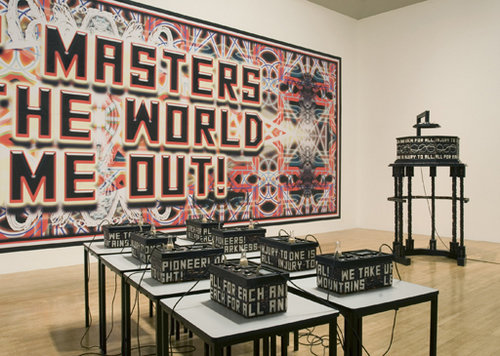 The Turner Prize 2006 exhibition, supported by the makers of Gordon’s(r) gin, opens on 3 October at Tate Britain. It features work by the four shortlisted artists, Tomma Abts, Phil Collins, Mark Titchner and Rebecca Warren. The winner of the prize will be announced during a live broadcast of the award ceremony on Channel 4 on the evening of Monday 4 December. With the support of Gordon’s(r) gin, this year’s prize fund is £40,000 with £25,000 going to the winner and £5,000 each for the other shortlisted artists.

The shortlisted artists for the Turner Prize 2006 are:

Tomma Abts who presents a carefully conceived installation of eleven paintings dating from 2000 to the present day. Abts's densely wrought canvases take shape through a gradual process of layering and accrual, baring the visible traces of their construction. While each develops within its own specific parameters, tonal and formal relationships between works are revealed when hung together in the gallery.

Phil Collins who presents the video installation the return of the real/gercecegin geri donusu 2005, originally commissioned by the Ninth International Istanbul Biennial, in which he invited people who felt their lives had been ruined by appearing on talk shows and makeover shows to tell their stories. He has also established a working production office shady lane productions, operational Monday to Friday 10.00-18.00 in the Turner Prize exhibition, which will research a British episode of the return of the real over the course of the exhibition.

Mark Titchner who presents How To Change Behaviour (Tiny Masters Of The World Come Out), a quasi-scientific installation that features hand-chiseled machines alongside a computer-designed billboard and questions the faith we place in technology. Titchner is fascinated by belief systems and by the ways in which we communicate and receive ideas. He will also show Ergo Ergot, a striking, kinetic sculpture that uses optical illusions and hypnotic effects to manipulate the viewer’s perception.

Rebecca Warren who presents an installation of new sculptural works. The exuberant vitality of her unfired clay sculptures contrasts dramatically with wall-based vitrines displaying various found objects. A new series of bronze figures plays with the traditional connotations of the material. While deliberately anti-heroic, Warren’s works possess a powerful physicality and a persuasive emotional charge.

As in the previous two years of sponsorship, the maker’s of Gordon’s(r) gin are supporting a free audio guide to the exhibition. The makers of Gordon’s(r) gin are also sponsoring Late at Tate Britain this year; a series of events allowing visitors to explore art after hours, enjoying exhibitions, performances, music, talks and films on the first Friday of every month.