The loneliness of signs. Fire exit signs, arrows, no smoking signs - modern humanity is surrounded by pictograms. In contemporary art, the occupation with pictogrammatic symbols by artists such as Lars Arrhenius, Nic Hess, Marc Bijl, Claude Closky and Fiona Rae has become an important and very topical theme. One of the highlights of the exhibition is the project "A Single Script" by the internationally recognized Chinese artist Xu Bing. Parallel to the exhibition pictogram-flags by Matt Mullican. 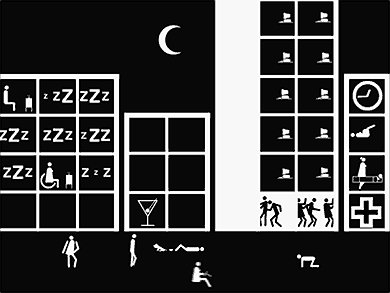 The Loneliness of Signs

The yearning for a universal language has been a central theme in art since the beginning of the modern age. The decomposition of familiar visual worlds - which Giorgio de Chirico poetically called "the loneliness of signs" - and the disruption of traditional systems of reference, provoked the desire for new means of communication between artists and viewers. The special exhibition in Stuttgart is the first one to trace the history of the pictogram against the background of a development of codes in modern art:

Already at the beginning of the twentieth century, artists from the avant-garde movement made significant contributions to the reanimation of a system of signs that was considered to be rigid and lifeless. Andrej Belyj perceived the movements of the tongue as "gestures of an armless ballerina" and developed a system of complex symbols from the spoken language, the so-called graphisms. In 1904, Wassily Kandinsky claimed to use art in order to develop a language that was more effective than Esperanto. The Swedish theosophist Hilma af Klint created a cosmos of impressive abstract forms, which only "insiders" are able to interpreted. Using human figures, El Lissitzky and Alexander Rodtschenko developed pictograms, which are meant to be decipherable for workers and children alike, at the service of a new society.

In the twenties, Gerd Arntz and Otto Neurath employed pictograms to illustrate abstract relations, for example the visualization of population statistics. Here, the fields of applied arts and fine arts are often inextricably linked to each other.

The exhibition ties in with the permanent collection of the museum: Willi Baumeister’s sports pictures, for example, are in surprising analogy to Otl Aicher’s pictogram studies.

The return of the symbol is visualized in the exhibition through the example of Durer’s hare and the Swastika. In 1970, Sigmar Polke started an endless game of references within the field of art by quoting Albrecht Durer’s famous watercolor from the year 1502. The National Socialist’s use of the Swastika - a religious and ritual symbol for the sun and for good luck, dating back to highly developed ancient cultures - shows, however, how drastically the meaning of a symbol may change.

In contemporary art, the occupation with pictogrammatic symbols by artists such as Lars Arrhenius, Nic Hess, Marc Bijl, Claude Closky and Fiona Rae has become an important and very topical theme. One of the highlights of the exhibition is the project "A Single Script" by the internationally recognized Chinese artist Xu Bing.

With approximately 350 exhibits from Germany and abroad, a fascinating collection of diverse symbols awaits the visitor, offering a surprising variety of interpretations that go much deeper than mere self-evident analogies.
The exhibition will be sponsored by the Ministry of Culture.

The exhibition catalogue will be published at the beginning of November by the Deutscher Kunstverlag with the title "Pictograms - the Loneliness of Signs", edited by Kunstmuseum Stuttgart, German/English, 400 pages and 250 images.
Museum price: € 28; Bookshop price: € 34,90.

Parallel to the exhibition "Pictograms - The Loneliness of Signs", the Kunstmuseum will present pictogram-flags by Matt Mullican. The show will be hosted for the first time by Stuttgart airport. In this unique exhibition location, which is by its very nature full of pictograms giving instructions of where to go and what to do, the question posed by the special exhibition in Stuttgart will be even more apparent: what happens when a pictogram that has been created with the goal of easy and quick comprehension is transferred to art?

Matt Mullican was born in Santa Monica, CA, in 1951. He received a BFA from California Institute of the Arts in 1974. Over the last several decades, his work has been shown extensively in galleries and museums in the U.S. and internationally, and is included in the permanent collections of major museums including The Museum of Modern Art, The Whitney Museum, MOCA Los Angeles, The Ludwig Museum, and The Pompidou Center. He has also completed a number of public and private commissions in the U.S., Europe, Japan and Canada.

Mullican's work is based on a system of categorizing experience, a spectrum that ranges from pure subjectivity to pure objectivity. Through this system he explores the ways we represent, navigate and reinforce our individual and collective perspectives on reality.

Mullican‘s pictogram-flags that the Kunstmuseum Stuttgart presents at Stuttgart airport, each the size of eight times seven meters large, were first shown at the Neue Nationalgalerie in Berlin in 1995. In the catalogue of this previous exhibition Friedrich Meschede wrote: "It may be added as a closer explanation of the signs that the depicted head represents the individual human-being with his view of the world. In a sense, the square with the enclosed circle shows, as if through a magnifying glass, the section which we always see when we view the world individually. Each takes his own section as a representative symbol of the world, a fact pregnantly expressed by Mullican in the next picture, the framed world. The entire world now fills the circular form which represents the sign in the symbol of the sign. This development of our perception from the individual to the detail is responded to by the depiction of the unframed world before a blue background as an expression of Utopia, the world seen in its entirety and in unity, without limitations. Finally, the four circular forms in their symmetrical arrangement symbolize the appropriation of the world based on concepts of order, our division into elements and systems. The figure four stands for the four elements of fire, water, earth and air, also for the four points of the compass, the four seasons - indeed, it stands for the inner ordering of the world as such."

Now these artistic pictograms will be on display in a completely different context and therefore gaining yet
another meaning and depth. It will be the first time that Mullican‘s work is shown at an airport - a challenge the artist was looking forward to for some time now. The opening of this collaborative project hosted by the Stuttgart airport and the Kunstmuseum Stuttgart will be on Friday October, 26 at 11am.