Express. The 20th edition from the series “Contexts of the Permanent Collection" is the first to be devoted to a living artist. The exhibition focuses in particular on his painting Express of 1963, one of a small group of works that marks Rauschenberg’s evolution towards a new pictorial and expressive style. 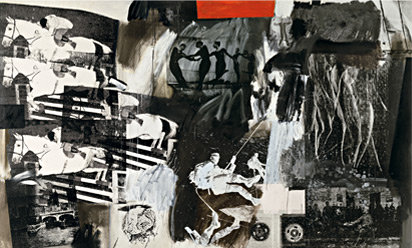 The 20th edition from the series “Contexts of the Permanent Collection" in the Museo Thyssen-Bornemisza is the first to be devoted to a living artist. The subject is Robert Rauschenberg (born Port Arthur, Texas, 1925) and the exhibition focuses in particular on his painting Express of 1963.

Express is one of a small group of works that marks Rauschenberg’s evolution towards a new pictorial and expressive style in which he was able to convey his visual universe while simultaneously resolving with great audacity the problem of reconciling figuration and abstraction. From 1962 onwards the artist began to experiment with a new artistic technique - oil, ink and serigraphy on canvas - which would became the basis of his work over the following years. This method allowed him to incorporate enlarged photographic images printed on silk panels into his works. He then transferred these images to his canvases, superimposing and combining them in the manner of collage, before completing the composition in oil.

Rauschenberg began these serigraphic paintings in the autumn of 1962, emphasising the use of black and white with a resulting dark, austere mood, and continued until the end of August 1963, the year when he started to introduce colour to convey a more positive mind-set. The enlarged images are reproductions of photographs taken by the artist himself or selected from magazines and depict historical and contemporary news events. Many recur in more than one work; in the present exhibition, for example, the same image of an eagle, the official symbol of the USA, appears in Kite and in Manuscript. Rauschenberg’s serigraphic paintings capture and freeze a moment of reality through the artist’s images. The increasing tension over the Vietnam War, for example, forms part of the background to many of these works and reflects Rauschenberg’s pacifist stance.

Express combines a variety of viewpoints, using frontal, aerial and oblique perspective, while also mixing and modifying the proportions. The figure of the choreographer Merce Cunningham is reduced to a tiny patch, while in contrast the photograph of Cunningham’s trio, comprising Carolyn Brown, Viola Farber and Steve Paxton, is enlarged. The title of the painting seems to refer to a movement at high speed as well as to something more precise and exact, perhaps the expression of a particular creative impulse. Whatever the case, both the title and the images in the painting suggest the idea of movement, speed and co-ordination. These qualities are suggested in the rider, repeated four times, who seems to jump out of the canvas; the sequence of photographs of a nude woman in movement, recalling Marcel Duchamp’s famous painting Nude descending a Staircase; and various mountaineers climbing up vertically from the lower edge of the painting against a black background in an image adapted from a US army recruitment poster.

During a trip to Cuba in 1952 Rauschenberg experimented for the first time with transferring printed images onto paper. By soaking images cut out of newspapers and magazines in solvent then rubbing them from behind with a blank pen, he achieved an incomplete, fragmented type of image. It was from 1958 onwards, however, that he developed this technique most fully, represented in the present exhibition by eight of the thirty-four illustrations to Dante’s Inferno (1958-1960), and by Hallucination, a work on paper of 1960.

Illustrating Dante’s Inferno presented the artist with a challenge. In order to fully grasp the nature of illustration and resolve the problem that presented an obstacle to his future development the artist had to develop a new mode of representation that did not involve the use of traditional drawing or painting but still remained within the mode of figuration. Rauschenberg would read a canto in the original and in an English translation then choose images from Newsweek, Time and Life magazines which seemed to him to correspond in some way with Dante’s descriptions. He then combined these images with his own drawings and watercolours. Using this approach he illustrated each one of the thirty-four cantos of the poem within a contemporary context in which Dante and his guide Virgil appear as politicians, athletes or astronauts. The relationship between Dante’s text and Rauschenberg’s images is neither literal nor obvious but the artist creates a certain emotional impact, which he conveys through his choice of images and the agitated lines of his own drawing.

Rauschenberg is an enormously innovative and prolific multi-disciplinary artist who constantly experiments with different materials, techniques and the application of new technology to art. His quest for new forms of expression, his critical approach and his commitment to society made him one of the most influential figures for young artists in the last decades of the 20th century.