The show includes new films and photogravures and a montage of images across a whole wall. Baranowsky visited China in 2005 and 2006. She made several films on life in China less through a narrative of the everyday, but rather by showing the everyday in its own deceptive way of suggesting objectivity. 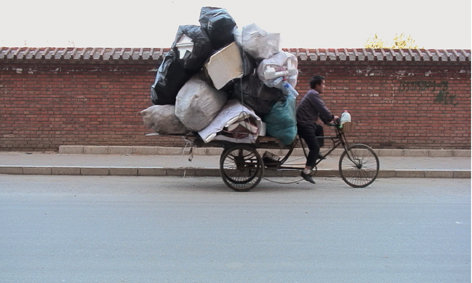 For the fourth time Galerie Barbara Weiss is presenting a solo show by Heike Baranowsky. This includes new films and photogravures and a montage of images across a whole wall.

Heike Baranowsky visited China in 2005 and 2006. She made several films on life in China less through a narrative of the everyday, but rather by showing the everyday in its own deceptive way of suggesting objectivity.

The imprecise middle ground between alleged objectivity and voyeurism, which sets free culturally tinged associations, frequently leads to a falsification of an interpretation of a given situation. This is the case in the film "Interval" (2006), in which a megaphone is seen on a chair in the open air and a loud litany of words is heard in the language that is so foreign to Western ears. The listener may assume that this is a case of propaganda or indoctrination, or the repeated chants at a demonstration. This is a common interpretation, but it is fundamentally wrong, for what we hear in this case is the menu of a nearby restaurant.

A narrative moment is produced on a secondary level through the soundtrack, which frequently does not correlate with the image. This kind of sound collage creates an inner world that withdraws from the reality of the image. Sound opens up a static situation in which the space becomes visually restricted as if on a stage, as in "CUE 1" (2006), a work that only superficially seems to raise questions about staging or the quiet observation of a seemingly everyday scene. People are going about their business; children are playing or posing for the camera. What is seen from a fixed standpoint is alienated by the incongruity of the sound, indicating something which has nothing to do with the situation in question - in this case it is the sound of traditional musical instruments.

Heike Baranowsky captures situations in Chinese everyday life, as in her sixteen-minute film projection "T Square" (2006), which she made together with Waszem Khan. The film operates with a hardly perceptible and slow and regular zoom in on Beijing's Tiananmen Square, where the evening ritual of lowering the state flag is in progress. The transition from a city panorama to the action at this historically and politically charged location is accompanied by a change in atmosphere, both through the onset of darkness and a shift in perception from mere viewing to observing.

The Western view of China is primarily determined by media reports about a country negotiating Maoist restrictions and global openness, about a state with a remarkable rate of economic growth, and not least images of the massacre on Tiananmen Square now more than fifteen years ago. This is a Western view, which Heike Baranowsky investigates and alienates through processes of manipulation. She demands a second view, which breaks through both static observation and permanent motion, and thereby distorts and expands accepted reception strategies of the visual.

Heike Baranowsky was born in 1966 in Augsburg. She lives and works in Berlin and Bergen (Norway).