A web project of short films created and curated by the avant-garde filmmaker, artist, poet, and archivist. After six decades of work, this 84-year-old Mekas has become internationally renowned for his deeply personal films. With his unique diaristic approach, he continues to captivate viewers while adopting new methods of technology and contributing to the emergence of Independent Art Cinema. 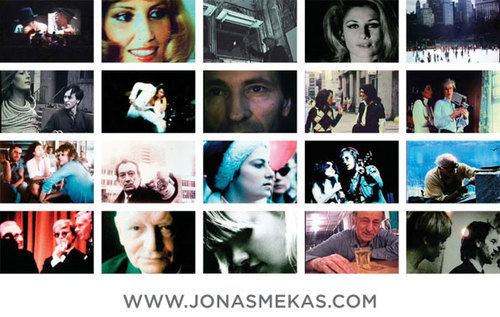 Maya Stendhal Gallery proudly presents Www.JonasMekas.Com-Recent Work; a collection of 40 short films created and curated by avant-garde filmmaker, artist, poet, and archivist Jonas Mekas. After six decades of work, this 84-year-old artist has become internationally renowned for his deeply personal films. With his unique diaristic approach, Mekas continues to captivate viewers while adopting new methods of technology, encouraging and contributing to the emergence of Independent Art Cinema. In addition to this elaborate cinematic installation, all 40 short films will be simultaneously released for download onto computers or multi-media devices at www.jonasmekas.com. According to Mekas, this will be, “…one of the most exciting venues for independently working film and video makers that has become available."

A corresponding Web project of 365 short films will also be launched beginning January 1, 2007. Mekas will release the films, one for each day of the year, through www.jonasmekas.com, his Daily Journal. Inspired by a poet writing a poem each day of the year for his lover, he will create a similarly poetic statement through these deeply personal films, reflecting on his life and sentiments of both past and present. Working from his vast video archive of footage, these films aim to “celebrate the small forms of cinema, the lyrical form, the poem, the watercolor, etude, sketch, portrait, arabesque, and bagatelle, and little 8mm songs."

Mekas presents his interpretation of life through a powerful audio-visual reality. Momentary fragments are flashed on the screen in a fleeting and poetic way that sustain seemingly disconnected images as one continuous moment. The mysterious footage, which he intuitively captures, is edited entirely within the camera. He also sometimes repeats pieces of footage in more than one film, creating a new meaning in a separate, yet often connected, context. The movement of still images, light, and the use of unusual camera angles, dominate the aesthetics of his films, many of which he actively participates in by turning the camera on himself or including his voice or laughter. Mekas’ unique hand-held approach to shooting creates the feeling that reality is one continuous poetic statement of the moments that hold together fragments of every day life. Diaristic in nature, the films not only correspond to a particular memory or emotion of the filmmaker, but also aim to evoke a collective memory for viewers. Many of his techniques have inspired other independent filmmakers, as well as mainstream media projects including reality T.V., and M.T.V., and music videos.

Jonas Mekas has dedicated his life to not only filming, but also creating a discourse for independent art cinema. He began screening underground films in 1953, launched Film Culture Magazine in 1954, and began writing as a film enthusiast for the Village Voice in 1958. He also was one of the founding members of the Filmmaker’s Cooperative in 1962. In 1972, the he then expanded the Filmmaker’s Cinematique into Anthology Film Archives, which he still runs today while also teaching at several universities and curating film programs. Mekas continues to pioneer new artistic advancements in Film and Video. Through embracing opportunities of new technology, Mekas is creating a Digital Revolution by which the work of experimental art filmmakers will be widely exposed to audiences across the world. The site will also host a series of guest filmmakers such as Jim Jarmush, Martin Scorsese, and Kenneth Anger from Anthology Film Archives, classics Harry Smith and Maya Deren, as well as submissions by emerging young filmmakers. As history in-the-making, this new cinematic discourse not only expresses Mekas’ vision for independent art film of the future, but also exposes his past and present life through the artistic beauty of his work. By also creating a virtual online gallery of the films, Mekas is expressing his artistic vision to free the cinema from its previous restrictions of exposure.