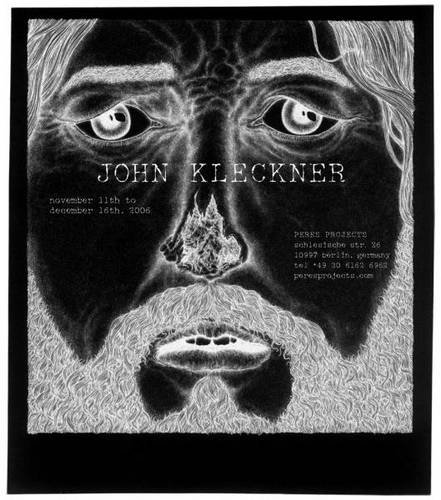 Javier Peres is very pleased to present New York based artist John Kleckner in his first solo exhibition in Berlin. On display will be a selection of Kleckner's most recent works on paper.

John Kleckner (b. 1978) creates proto-emotional pictorial phenomena that employ metaphors of biology and evolutionary ecology. His works depict human beings in stages of transformation-to occupants of lush natural realms, to unexplained physical states, and to obscure crevices of metaphysics. They evoke a revelatory exposure of the artist and the inner self at large.

Working alone in an intemperate, small space not accessible to the handicapped, Kleckner does more than tip his hat to the monastic, technical masters of the 15th Century, yes. His recent work functions as an esoteric example of meditative contemporary art, something that gratifies the eyes, which become lost between the hundreds of thousands of nano-strokes. The evidence of such labor defies expectation and subverts the practice and production of the ready-made appropriators who exhibit in the year A.D. 2006.

With a languorous softness that defies the difficulty of the formation of its parts, Kleckner's works fulfill the exhibition space and do not fail to hold the viewer at rapt-but friendly-attention.

For further information or reproductions please contact Margherita Belaief at tel. +49 30 6162 6962 or margherita@peresprojects.com or Javier Peres at Javier@PeresProjects.com.