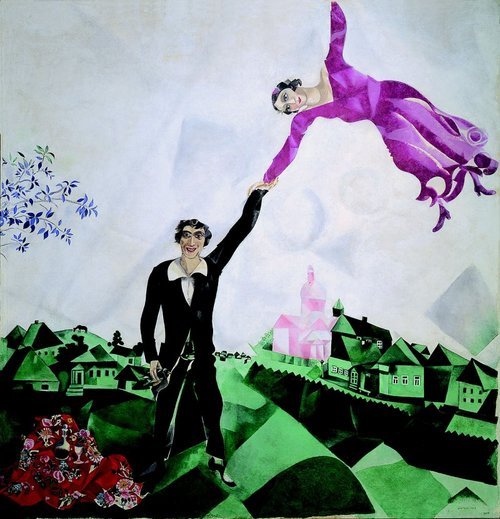 In Fall 2006, the BA-CA Kunstforum presents an exhibition focusing on the "Russian" years of Marc Chagall; - the period until 1922, when he finally left his home as an artist and headed for the West. With this exhibition, the BA-CA Kunstforum continues a series of great exhibitions, which have been dedicated to the key works of art of famous Russian artists of the 20th century: the first comprehensive retrospective on Kasimir Malewitsch, 2001 and the Wassily Kandinsky exhibition: "The sound of color", 2004, which dealt with the most crucial years of Kandinsky's way to Abstraction and thus his influence on the avant-gardes of the 20th century.

Also the exhibition "Marc Chagall - The Masterworks" explores the most important and lasting years of this great painter. It is the early Chagall, who had a radical effect on artists and the public: the tales from the Shtetl, the magical world of Old Russia, lost in reverie, captured in an expressive painting, equally fascinating contemporaries and descendants.

A special highlight are the unique, extremely fragile, monumental sets for the Jewish Theater in Moscow dating from 1920 - a multilayer composition on several canvases, which display an incredible spectrum of the Yiddish world, in combination with motives from the Jewish and Russian folk art and Synagogue painting. Due to the connection of rich narration with Chagall's characteristically unorthodox image composition, his venturous coloring and his own poetic aesthetics, this work undoubtedly belongs to the icons of Classical Modern Art.

This main work of the exhibition is flanked by a series of other paintings from the period between 1910/11 and 1922. Besides other rarely shown paintings, from the Tretjakow-Gallery in Moscow, the complete Chagall-Collection of the State Russian Museum in St. Petersburg will be shown as well - a great opportunity to see the portfolio of these outstanding collections of Russian art for the first time in Vienna. Individual loans from the Guggenheim Museum and the Museum of Modern Art in New York, the Muse'e National d’Art Moderne Centre Georges Pompidou in Paris, the Stedelijk Museum, Amsterdam, the Tate Gallery in London, and other international museums, will complete the selection of works from Russian museums. The exhibition will include about 80 paintings. A second venue is planned in the Phillips Collection in Washington.