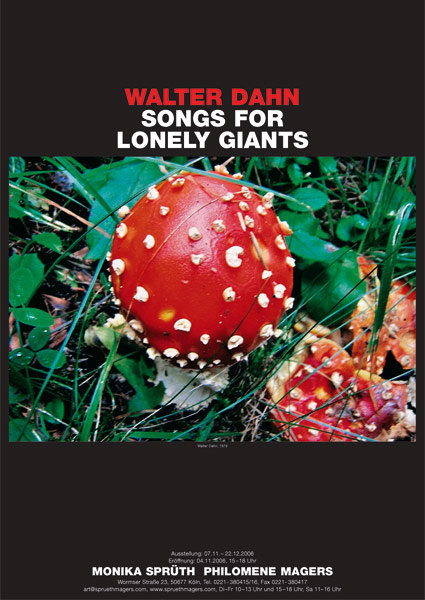 Monika Spruth and Philomene Magers are proud to present in this year’s fall exhibition new works by Walter Dahn.

The strategy of appropriation has been central to the art of Walter Dahn since the turning point in his artistic production in the years 1989/90. At that time, the artist turned away from pure painting as it was practiced by Baselitz or Lupertz, for example. The individual and personal, which used to be reflected in Dahn’s expressive brushwork, would now manifest itself in his selection of pictorial motifs. For the artist, however, this does not imply the abandoning of painting. The arranging of color on a canvas has simply been replaced with the arranging of found objects on different materials, a process that Dahn once referred to as “conceptual painting" - a term he still uses today.

In this exhibition Walter Dahn displays his pictures and objects in showcases reminiscent of natural history museums.

Dahn treats some of his found objects like readymades, but often he transforms them, using different artistic techniques. Since the late 1980s, silkscreen printing has been one of his favored methods. The artist recontextualizes the technique by producing originals and applying a method initially designed for the high-gloss world of advertising to natural materials such as fabric, gauze, cardboard, felt or linen.

In his work, Walter Dahn draws from a pool of motifs which is fed by several different springs: pop culture and its means of communication such as flyers or posters; film; music; kitsch; folk art; ethnology; art history; graffiti; and also his personal surroundings and nature. Some of his motifs, which also include lettering, song titles, band names or film titles, seem to have become more internalized than others and keep recurring in his work.

Like pictorial objets trouve's Dahn blends the motifs and creates pictures which can be read as highly personal emblems and at the same time possess the aesthetic quality of an album cover. They seem to represent Dahn’s 'individual mythology’ and an affirmative view of the world that shaped the artist. The collaging and assembling of pictures within a picture results in new realities and meanings, detached from their original non-artistic context. Thus the title of the 1972 Jamaican cult reggae movie The Harder They Come starring Jimmy Cliff is rendered in European Art Nouveau lettering. This inscription still conjures up the spirit and the attitude towards life represented by the film, but outside of this context it also functions as a sign in the microcosm of the picture.

In contrast to the large canvasses he used in the beginning, Dahn currently works in the medium-size range. Instead of the grand gesture Dahn grants us a view of his cosmos, the elements of which seem to gain their full meaning and validity only through the process of their pictorialization.