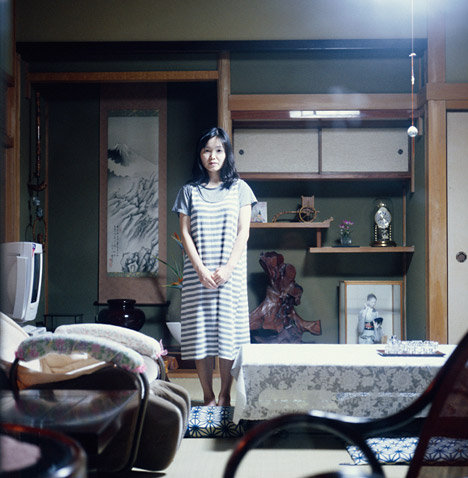 The exhibition "The Photographer's Contract" features photographic series in which a two-sided working relation was established between the artist and the person photographed. The images are based on a concrete or unspoken agreement: both parties pursue a goal that can only be achieved mutually through this special form of collaboration. The exhibition aims to give the first ever overview of the premises and strategies that have been involved in photo portraiture since the 1970s. To this end it shows outstanding works in which the 'The Photographer's Contract' plays a central part in the creation of the visual image.

The exhibition "The Photographer's Contract" gives the first ever overview of a very particular branch of portrait photography in contemporary art, one that involves an agreement between the photographer and the person portrayed. Works of 17 artists are shown in this exhibition made between 1975 and the present. The idea behind the concept of the contract is that autonomous individuals make an agreement aimed at the mutual benefit of all parties. Applied to photography, this means a concerted involvement in making the picture, in which the photographer as a rule stipulates the framework and the people who are portrayed participate in the overall process - often with great personal commitment and a willingness to take risks that strongly influence the outcome.

England-based artist Shizuka Yokomizo collected addresses of a number of people she did not know and sent them a kind of letter contract. In the letter she asked the addressee to stand at a particular time of day at the window of their flat or house and allow themselves to be photographed anonymously. If they were unwilling to participate, they could make this especially clear by drawing the curtains. Yokomizo promised in her letter that the recipient would participate in an exhibition, but granted them the freedom to decline the publication of the finished photograph. In this project, Yokomizo investigates the issue of the autonomy of the human subject in present day society: Who does their body actually belong to when its availability can be negotiated? And how strong is the person's interest in maintaining control over their own body and its image?

In her series "The Europeans", Tina Barney aims just like Yokomizo at the desire for representation, which is deeply rooted in bourgeois photography of the 19th century. Barney documents how the European "Upper Classes" stage themselves, as expressed in extravagant interiors and their almost baroque postures. Her protagonists are the heirs to the 19th century, and the outside eye of the American photographer teases out the way a class is enwrapped in its own tradition. Her picture "The Doll" shows a father and daughter hugging one another tightly and looking at the youngest member of the family, a child playing with a doll. But who is whose plaything? Which is the doll?

In Marjaana Kella's photographs, on the other hand, the chief aim of the agreement is a mutual gain in knowledge. Kella invited volunteers to participate in hypnosis sessions at her studio, which she photographed. While the volunteers were able to participate in a highly unusual project, Kella was able to tackle a central issue concerning the genre of photography: She is convinced that portraiture is unable to capture a person's essence. What is clearly revealed in this procedure is the way a person's feelings differ so markedly from their adult physical appearance when they are placed under hypnosis in the situation of, for instance, a little child.

The artist Ashkan Sahihi performed an experiment with a group of volunteers who had little or no experience with drugs. He locked himself together with them one at a time for a lengthy duration in a brightly lit studio. The volunteer had previously selected an illegal substance, which was now ingested under controlled conditions. The camera captured the specific changes it produced in the person's mind and body, changes that are not normally perceived in the dark, privatized spaces reserved for drug consumption: swings in mood, bloodshot eyes, dilated pupils, spasms, tranquillization etc. And while the volunteers are interested in a (safe) experience in a normally inaccessible realm, Sahihi's aim is to cast light on the drug phenomenon. He wants to counter the "drug look" in fashion magazines through a realistic picture of drug consumption.

Photography has bidden farewell to the traditional questions of verisimilitude, authenticity, aura or of whether it is mere documentation, and promptly adopted strategies from the fine arts that had previously been seen in other fields. This is particularly apparent in the photographs in this exhibition. The wide range of agreements that the participating photographers have made with their subjects have enriched the photographed image with elements from Concept Art, Performance, and certain kinds of participatory art that have been experimented with since the 1980s. And at the same time, photography can draw on its very own techniques and forms of presentation. With such compelling examples as these, "The Photographer's Contract" demonstrates a new development in contemporary photography in which it transgresses any number of boundaries without ever relinquishing its own identity.