An overview of his wide-ranging paintings and drawings. Architecture, theatre, literature, music, and cartography play a central part in his work. From maps, town plans and architectural drawings the artist creates imaginary poetic and territorial worlds in which reality and fiction merge. Redrawing the map of the world, Kuitca brings to light complex spatial relationships and intricate social processes. 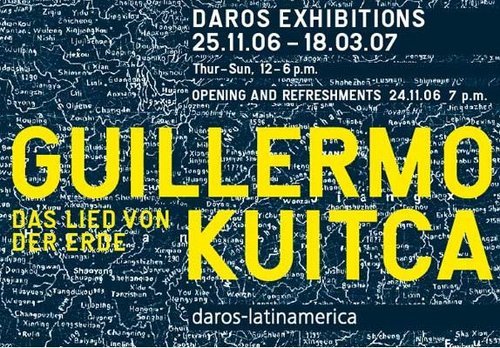 Argentinian Guillermo Kuitca (born in Buenos Aires in 1961) is one of Latin America's leading contemporary artists. The major exhibition at Daros Exhibitions in Zurich provides a representative overview of Kuitca's wide-ranging paintings and drawings. It unites over 100 works from the Daros-Latinamerica Collection with loans from the Tate Gallery, London, and the Milwaukee Art Museum.

Kuitca uses a variety of means to explore places and spaces. From maps, town plans, and architectural drawings the artist creates imaginary poetic and territorial worlds in which reality and fiction merge. Redrawing the map of the world, he brings to light complex spatial relationships and intricate social processes.

The maps that Kuitca paints are generally of places he has never been to. To this Argentinian-based artist, Europe and China are equally exotic. As he investigates far-off lands on canvas, the borders between physical and pyschological space dissolve. Transformed on the picture plane, three-dimensional spaces acquire a new, imaginary quality and scope. On one map, for instance, all the place names are replaced by the phrase 'Ich habe genug' (It is enough), giving viewers-travelers the impression that they are constantly returning to their point of departure. Orientation is impossible in this nightmarish situation, because our wandering gaze loses itself in open space. Kuitca's maps are reflections of the complex reality of life, not aids to navigation.

In such pieces as Afghanistan and Das Lied von der Erde (The Song of the Earth) the artist physically unites human existence with the world by painting his subjective, symbolic maps on matresses, beds being one possible nucleus of human life. Merging nearness and farness, private and public space, in this way, Kuitca shows that subjectively remembered images are just as inseparable from collective cultural memories as topographical spaces are from mental ones.

Das Lied von der Erde is based on an arbitrarily selected area of Chinese topography. The title comes from Gustav Mahler's eponymous cycle of songs based on ancient Chinese poems. The artist's images reverberate in our consciousness like songs establishing themselves in our memory through their language and formal structure.

Early in his career Kuitca discovered the theater as a source of inspiration, along with literature, film, and music. A major influence was the contemporary dance of Pina Bausch, which he encountered in the early 1980s. The abstract qualities of Bausch's choreography, and its concentration on essentials, encouraged Kuitca to adopt the theater as a field of experimentation. Kuitca investigates the specifics of the stage not only in his work as a theater producer and designer, but also in his painting. Focusing on the architecture of theaters and opera houses, on empty auditoriums, and on vague, dreamlike stage pictures, he addresses the theater as a mirror of the world, as a locus of external and internal events that involve both actors and spectators.