Heart of Darkness. The title refers to the book by Joseph Conrad in which the motif of darkness recurs to reflect the "primal darkness" against the light of civilization. The new paintings are a retranslation of this archetypal story converging it with our contemporary existence at the dawn of the new millenium. 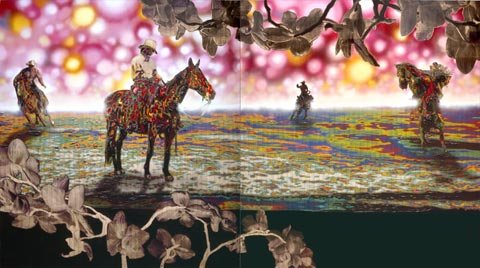 The title refers to the book by Joseph Conrad in which the motif of darkness recurs throughout the novel to reflect the "primal darkness" against the light of civilization and the ambiguity of both; the dark motives of civilisation, the freedom of the primal, as well as spiritual darkness. Francis Ford Coppola's Apocalypse Now was inspired by the book where an assassin undertakes an odyssey up a river to terminate with Œextreme prejudice a rogue commander (played by Marlon Brando) who has over-identified with the military system to such an extent that he is able to truly understand and oppose its horrors and in the epic tradition of Homer and the myth of Orpheus journey¹s into the darkness of the human soul.

Gordon Cheung has conceived his first solo show of new paintings in Brazil as a retranslation of this archetypal story converging it with our contemporary existence at the dawn of the new millenium. The communications and digital revolutions collapsed notions of time and distance into the instant reconfiguring our perceptions of time and space into a state of flux. 90s Utopic euphoria of the digital frontiers, information superhighways, cyberspace and global villages gave way to technophobic hysteria of apocalypse from the Millenium Bug along with the technology stock and dot com bubble crash. We entered the new millenia with one threatening wave of apocalypse after another with Enron and Worldcom corrupting and collapsing along with the 911 attacks, a global War on Terror while the world also grappled with it¹s fragile relationship to nature itself.

In Cheung's paintings the Financial Times stock listings are used as a metaphor for a globalised virtual space that literally saturates and interlinks our lives. Essentially the paintings can be understood as a hyper-paint-by-number depicting a virtual landscape oscillating between Utopia and Dystopia, Heaven and the Underworld. The paintings fragmentary multi-layered nature seeks to provide deconstructive pathways to peel the fractures in the glossy surfaces of modern life so that we might slip beyond to question the emergent patterns and shadowy underbelly of what shapes our world. Cheung invites us to undertake a journey through his paintings and reflect on our techno-sublime world flickering our perceptions of realities between the virtual and actual.