A group show which brings together sculpture, installation and works on paper from four of the gallery's artists. It will include impossible sculptures by Peter Callesen, an installation relating to magic and hypnotism by Karen Kilimnik, a new "Dream Object" by Jim Shaw emerges from his 20-year dream-project, Marnie Weber's new collage and sculptures which revisit the themes of transformation and journey. 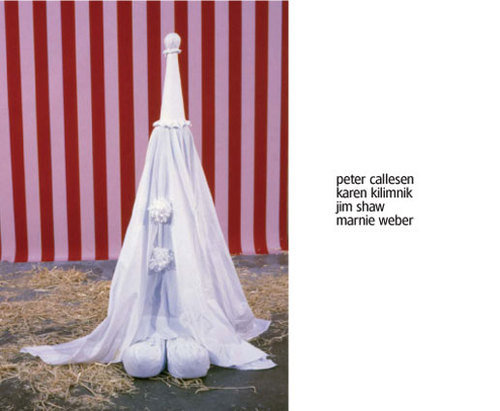 Emily Tsingou Gallery is pleased to announce a group show which brings together sculpture, installation and works on paper from four of the gallery’s artists.

The exhibition will include new work by Danish artist Peter Callesen. Transformed from basic A4 copy paper, the fragility of these elaborate and seemingly impossible sculptures, relates to themes of transience and failure. Taking inspiration from myth and fairytales, the works are humanistic and poetic gestures to the impermanence of life.

An installation relating to magic and hypnotism by Karen Kilimnik is inspired by the pop-culture of the 1960s. The artist’s nostalgic wonderment of this era in British history can be felt in a bizarre imagining of fashion, psychodelia and experimentation.

A new “Dream Object" by Jim Shaw emerges from his 20-year dream-project in which he has fervidly catalogued scenarios from his sub-conscious. This sculpture will be presented alongside a three dimensional self-portrait, which continues Shaw’s probing of artistic authorship and the artist-hero cliche'.

Marnie Weber’s new collage and sculptures revisit the themes of transformation and journey which have been central to her practice to-date. A new motif - “Ghost Clowns" - alludes to the hobo clowns synonymous with the American depression, transformed through death to a spectral existence in the afterlife. The peculiar imagery weaves a fractured narrative which reprises “The Spirit Girls" in a sinister tale of abduction. Weber’s hallucinatory creations take inspiration from the allegory of Victorian fantasy, Surrealism, and explorations of female identity

For further information and images please contact Gina Buenfeld on 020 7839 5320, or gina@emilytsingougallery.com