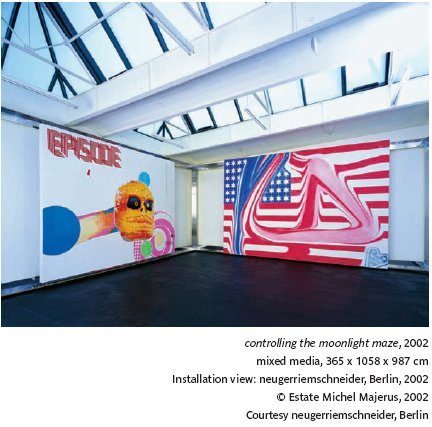 The Musee d‘Art Moderne Grand-Duc Jean, Mudam Luxembourg, is presenting from 9 December 2006 until 7 May 2007 an ambitious retrospective dedicated to the Luxembourgish artist, Michel Majerus. With over 250 pieces, the exhibition is showing the most important group of works ever displayed together. Created especially for Mudam, it concludes the series of exhibitions co-produced with the Kunsthaus in Graz, the Stedelijk Museum in Amsterdam, the Deichtorhallen Hamburg and the kestnergesellschaft in Hanover.

Born in Esch-sur-Alzette in 1967, Michel Majerus was regarded as one of the most promising artists of his generation. During his short career - he died in 2002 - he produced original works which oscillated between paintings and installations. He played with pictorial techniques influenced by the new digital world and combined these with a whole repertory of art history, most notably pop art and minimal art. His extraordinary installations are an ultimate demonstration of the enormous possibilities the pictorial medium offers today. By reproducing certain visual elements, and by inventing others, his work reflects the spontaneity, the colours and strength of cultures and sub-cultures: comic, computer games, techno music, graphic design, publicity...

The exhibition provides an opportunity to gauge the scale and dynamism of Majerus. It is not chronological, but puts the accent on how the works correspond with each other. From the first pictures, where he confronts the Masters of painting, to the huge spatial installations with multiple techniques and styles, passing via voluminous works in which he widens the field of painting, his oeuvre unravels throughout the ten-room itinerary, each of which bears the name of an emblematic piece. Mudam’s display is put together using the exact arrangements of the artist’s exhibitions, to stick as closely as possible to his intentions. It also shows pieces in the collection belonging to Mudam: Running in Cycles, acquired in 2002, as well as a recent donation from the Amis des Muse'e d’Art et d’Histoire Luxembourg, untitled (violet), 1997. The visit ends with a kind of return to the beginning, as the ideas of repetition and recurrence were constantly exploited by the artist.

An exhibition catalogue including texts by Robert Fleck, Veit Loers, Peter Pakesch and Raimar Stange among others has been published by Walther Konig, Cologne (312 pages, ISBN: 3-88375-930-9). It is available at Mudam for the price of 29 €.

Coproduced with Kunsthaus Graz, Stedelijk Museum Amsterdam, Deichtorhallen Hamburg, the kestnergesellschaft Hannover; the exhibition at Mudam is conceived specifically for Luxembourg in collaboration with the Gallery neugerriemschneider Berlin and Michel Majerus’ family.
The Muse'e d‘Art Moderne Grand-Duc Jean is supported by the Ministry of Culture, Higher Education and Research, Luxembourg.
The Banque de Luxembourg is the main Michel Majerus exhibition partner. With the support of: Cargolux, Les Amis des Muse'es d’Art et d’Histoire Luxembourg. This project takes place in the framework of Luxembourg and the Greater Region, European Capital of Culture 2007, under the High Patronage of their Royal Highnesses the Grand Duke and the Grand Duchess.