Ayreen Anastas and Rene Gabri's project consisted of a nation-wide campaign beginning with the question "How is it that a camp like Guantanamo Bay can exist in our time?" The event is neither curated nor organized as an archive of the campaign, but instead "follows" a script of a different kind. It looks like a conventional show. The next day the space is transformed and the public is invited to an unfolding process. 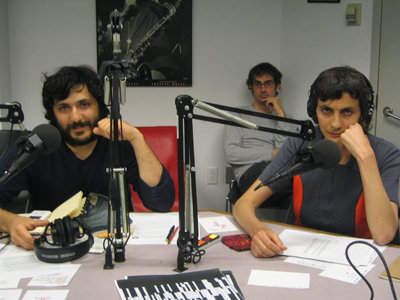 Ayreen Anastas and Rene Gabri’s newest project, Camp Campaign, consisted of a nation-wide campaign beginning, in New York City, with the question, “How is it that a camp like Guantanamo Bay can exist in our time?"

During the months of July and August 2006, Ayreen and Rene visited detention camps, internment camps, camping sites, and relief camps, among other types of camps in the USA. During their travel, they filmed and photographed these places, as well as the roads in-between, creating a collection of images that together show a political landscape of this country. They camped in the rural outdoors, and in metropolitan areas they camped at homes. In towns, they parked their van, which also functioned as a studio, and set-up a tent, where their campaign materials, buttons, stickers and the like were distributed. They gathered with camp people, lawyers, theorists, artists and activists. Sometimes they conducted interviews; other times, they discussed different manifestations of states of exception (government’s suspension of the rule of law).

Aside from these engagements, the artists created http://www.campcampaign.info, a website that they updated regularly during their travel. Including their writing, an anthology of reference texts, and journalistic accounts accompanied with images or podcasts of their activities, this website does more than set the campaign’s ideals and political platform. It also becomes a site where the artists openly question the project’s form, beginning from its naming, that of a campaign, and on to its efficacy.

Fear is Somehow Our For Whom? For What? + Proximity to Everything Far Away. is a map by Ayreen and Rene that traces the geographic and intellectual cartography of their project Camp Campaign. It is published on the reverse side of Art in General’s Winter INSIDE newsletter, and is distributed for free beginning in January 2007. To make this map, Ayreen and Rene took their original plan—a pristine, digital drawing that sketched the travel route that the artists would follow—and rendered their actual journey they made through the USA during the summer. But this time, the artists included a more meticulous map legend, list of relevant terms, and an index route which is a series of notations. Numbered, as to refer to a loose chronology and to operate as footnotes to the sites they visited, these notations begin in the style of travelogue but, almost immediately, move away into an intellectual journey.

While the map can be seen as a documentation piece of their travel, Ayreen and Rene’s Camp Campaign exhibition at Art in General’s Project Space takes a different stance. The exhibition is neither curated nor organized as an archive of the campaign, but instead “follows" a script of a different kind. In a way, it is about what is impending in Camp Campaign, a resolution of sorts. Here, this imminence is presented as a script that is being performed.

The script, tentatively titled, “Project for an Inhibition in New York or How Do You Arrest a Hurricane?" is a proposal authored by two artists known as RL and VL. On the one hand, this script is a program for the gallery or art installation, and on the other, it is a screenplay for a film. Yet, both of these are meta-scenarios, that is, both proposals are themselves written and formalized as a work in progress. The script is a self-reflexive text that puts into play the reality and physicality of the installation and the screenplay for a film to be shot. A copy of the script as screenplay is available at the space.

As a screenplay, the script describes the process of two artists, RL and VL, who are working out how to give form to their questions, concerns, and ideas. They are challenged by the idea of an exhibition, particularly as it relates to the themes they have been exploring. They are thinking about a possible video, but they remain undecided.

As a program, the script becomes a playful guide for what the public can expect to see in the space at different points during the time of the exhibition. The script begins at the end, with an opening for the two artists. It looks like a conventional show, with a bare space with some projections and sound accompanying it. The next day, however, the same space is transformed into the working studio for the two artists and the public is invited to an unfolding process, an alternative scenario or proposal for an exhibition.

Ayreen’s and Rene’s campaign materials—both the promotional or documentary materials they produced—now become a part of the materials inside the RL and VL’s studio. The space contains unedited film/video footage, photos, slides, materials for building a model, plans, drawings, and other objects related to their trip through the US as well as other journeys the artists took in exploring their theme. These materials and how they are arranged in the space change according to the script.

The dependence to the script in order to construct the installation, activate it, and even experience it, is due, in part, to the project’s own syntax, formally, the “as if" that is necessary to describe it and that signals to the overlapping of the conditional and hypothetical reality of the work. In other words, making or experiencing the exhibition as if it were a work in progress by the artists RL and VL is one way of engaging with the script; the installation suggests a fiction, the activity of those two absent artists whose materials are there to be worked upon, on a different level, by both them and its audience.

While the Camp Campaign trip is the main aspect of Ayreen and Rene’s project, and the website one of its public manifestations, the publication of the map and the exhibition at Art in General are two other iterations of the desires and questions which motivated the artists. Each with its own form, space and distinct public, these are continually both sites of production and exhibition provoked by a common inquiry: to question the legality, as well as the phenomenological impact, of governing principles created, historically and today, “in the name of security."

Ayreen Anastas writes in fragments and makes films and videos. Pasolini Pa* Palestine (2005), m* of Bethlehem (2003), the Library of Useful Knowledge (2002) have been shown internationally in festivals, museums and cinemas but not yet broadcast on television. The new shorter Oxford English Dictionary was published in Rethinking Marxism, Volume 16, Number 3, July 2004. She has no affection for the proclamation of victory. Troubled by any image of herself, suffers when she is named.

Rene Gabri is interested in the complex mechanisms that constitute the world around us. He works alone as well as collaboratively within the folds of cultural practice and politics. Through his involvement with 16 Beaver (16beavergroup.org), , Rene has helped organize public readings, discussions and social activities. Along with Erin McGonigle and Heimo Lattner, he also works under the name e-Xplo (e-Xplo.org), which has resulted in a variety of public art projects exploring social, economic and political forces.

Collaborative works and projects by Ayreen and Rene have emerged through their extensive work together at 16 Beaver (http://www.16beavergroup.org). Their recent text, audio, web and video works have focused on the evolving legal and discursive shifts around different notions of security and the subsequent effects on everyday life.

Camp Campaign by Ayreen Anastas and Rene Gabri is commissioned by Art in General.