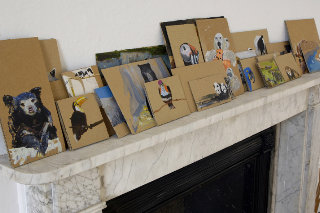 Freianlage is a German term meaning open enclosure, which was used by pioneering zoo-owner Carl Hagenbeck at the turn of the twentieth century to describe a new kind of more naturalistic animal enclosure. Andrew Bracey has long held a fascination with zoos, something which manifests in his own Freianlage, an intriguing combination of paintings and film that replicates and unhinges the viewers’ expectation of looking, thus eking out parallels between the zoo and the art gallery.

In a bizarre game of ‘hunt the animals’ the work is either partially hidden or placed in surprising juxtapositions in the gallery which need to be discovered and sought out rather than blatantly presented. Thus monkeys in magnifying glasses, jostle with perspex bears, zebras on charcoal boxes and animated penguins. The show is accompanied by the talk, Escape Claws: adventures with absconding animals, as part of the gallery’s Ask the Expert series, by writer and broadcaster Judith Palmer on Saturday 27 January at 5pm.

Supernature is a season of visual art shows and accompanying talks, workshops and writings, which examine contemporary culture’s means of constructing and classifying the natural world. By looking at how we attempt to order, own, control or live in harmony with nature, Supernature addresses the distinction in contemporary thinking between the apparently practical ‘green’ concerns of ecology and the more theoretical ways in which relations to the non-human world are historically mediated. Participating artists are Laura White, Annabel Dover, Sigrid Holmwood, Chris Humphreys, Andrew Bracey, Paul Harfleet and Hilary Jack.