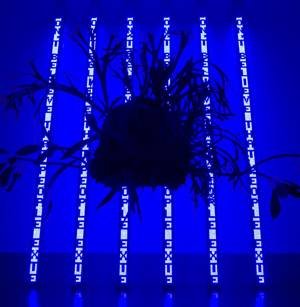 The Museum of Contemporary Art will present Artificial Light, an exhibition featuring dynamic new work by seven artists who use light as their primary material. The exhibition will be on view from December 7 to February 18 at the Museum of Contemporary Art’s annex, MOCA at Goldman Warehouse, 404 NW 26th Street in the Wynwood area of Miami, and will feature new sculpture and installations by Jennifer Allora and Guillermo Calzadilla, Spencer Finch, Ceal Floyer, Iva'n Navarro, Nathaniel Rackowe and Douglas Ross.

For these artists, actual light—natural and artificial-serves as a means to engage issues of perception, memory, energy and power. Influenced by the pioneers of light sculpture from the ‘60s and ‘70s, including Dan Flavin, Bruce Nauman and James Turrell, these rising artists have expanded the use of light as a sculptural form to address a broad spectrum of concerns. Their work maintains the strong interest of their predecessors in leading viewers to heightened awareness of their relationship to the object and its surroundings, but it goes further in its literary, historical and political content.

Artificial Light is organized by VCUarts Anderson Gallery in partnership with the Virginia Museum of Fine Arts and is curated by John B. Ravenal, The Sydney and Frances Lewis Family Curator of Modern and Contemporary Art at VMFA. A full-color case-bound catalogue co-published by VCUarts, VMFA and MOCA includes scholarly essays by Ravenal and by guest authors Paula Feldman and Kathleen Forde.

“There has been a resurgence of interest among younger artists working with light as a material," said Ravenal. "I'm excited to present new work by the particular artists in this exhibition. They represent a spectrum of approaches and make powerful, thoughtful and poetic light-based objects and installations. I'm sure audiences will find their work a memorable experience."

Bonnie Clearwater, MOCA’s Executive Director and Chief Curator stated “This exhibition is a perfect complement to Elusive Signs: Bruce Nauman Works With Light, the exhibition currently on view at MOCA’s Joan Lehman Building in North Miami which features Nauman’s light works from the 1960s to mid 1980s. The artists in Artificial Light have continued to explore the possibilities of working in light and the two exhibitions together offer a comprehensive presentation of its evolution."

Jennifer Allora and Guillermo Calzadilla have worked together since 1995 to create sculpture, photography, video and installations. Their work often responds to issues related to globalization by conceptually and physically linking distant locations. They sometimes use the work of other artists as raw material in their pieces, recontextualizing it to extend its meaning. In Growth (Survival), 2006, they have borrowed a kinetic light piece by Jenny Holzer Blue Wall Tilt, 2004, that consists of vertical strips of LED displays used to display terse statements about sex, violence and power. These serve as grow lights for a large stag-horn fern on to which the artists have grafted other tropical plants. The botanical monster becomes a living sculpture that is nourished by Holzer’s text as it plays out its uncertain future. Allora and Calzadilla are short-listed for the Guggenheim Museum’s Hugo Boss prize and exhibited in the 2006 Whitney Biennial. Allora was born in Philadelphia, PA in 1974 and Calzadilla in Havana, Cuba in 1971. They live in San Juan, Puerto Rico.

Spencer Finch explores the physical and mental aspects of perception and memory through work that draws upon intense observation of everyday experience. Finch was born in New Haven in 1962 and lives in Brooklyn, NY. His work Kaaterskill Falls (July 30, 2006 12:37 PM), recreates the quality of light at the famous site in the Catskills Mountains which served as a popular subject for writers and painters of the 19th Century Hudson River School who sought to depict the sublime in nature. Finch used the readings of a color meter to guide his composition of plastic gels over fluorescent tubes, resulting in the same quality of light of the original site at the time of his visit. Finch often chooses subjects that bear elusive historical or literary associations to support his interest in vision and what lies beyond the obvious.

Ceal Floyer uses ordinary non-art objects to make spare tableaux that gently subvert one’s perception and assumptions. Her spare works often play on light’s associations with revelation, which she counters by making the moment of realization one of viewers watching themselves. Entitled Overhead Projection, for the simple classroom and lecture device she uses in this work, Floyer’s piece for Artificial Light throws the image of a clear light bulb onto a wall. The projection creates the illusion that the bulb is providing its own light, much like a moon. Floyer, was born in Karachi, Pakistan, in 1968, educated in London, UK and lives in Berlin, Germany.

Iva'n Navarro, whose recent work centers on functional forms such as tables, chairs and doorways, incorporates a range of political references, as well as elements of social critique. He often explores utopian and dystopian themes, drawing upon formalist language and Modernist art and design. Navarro’s experience of growing up in Chile during politically tumultuous times have given him a keen interest in issues of power and deception. His work combines the radiance of light with themes of fear and violence. For Black Electric Chairs, he uses the basic form of Marcel Breuer’s classic 1925 chairs, replacing the originals chrome tubes with black-light neon. The electrified forms transform the utopian design into seductive objects that surge with dark undercurrents. Navarro was born in Santiago in 1972, and currently lives in Brooklyn, NY.

Nathaniel Rackowe uses light, motion and low-tech industrial materials to make large-scale kinetic works that animate large spaces. For his installation Dead Reckoning, Rackowe made a series of shed-like structures out of corrugated roofing and plasterboard. Inside the sheds, a 500-watt bulb moves back and forth on an overhead track through a 46-foot long corridor, shooting changing shafts of light across the gallery in a menacing manner. The viewer is drawn along, becoming a player in the futuristic setting and negotiating the shifting spaces like a figure in a video game, one source of inspiration for Rackowe’s art. Rackowe recently completed an outdoor public commission for Cardinal Place development in Victoria Square, London. He was born in Cambridge, England, in 1975 and lives in London, UK.