Rosa Barba, Jeremiah Day, Lonnie van Brummelen & Siebren de Haan and Aurelien Froment will depart on separate trajectories and time frames, which have been stimulated by the Irish political, economic and social context, or by the possibilities of production within the multi-disciplinary nature of Project Arts Centre. 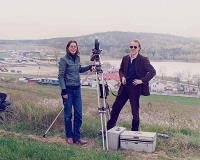 We are hoping to make more transparent the process of producing new works and publications with these artists by establishing the four international practices together in Dublin prior to embarking on the production of new work. Barba, Day, Froment and van Brummelen & de Haan will depart on separate trajectories and time frames, which have been stimulated by the Irish political, economic and social context, or by the possibilities of production within the multi-disciplinary nature of Project Arts Centre. Each of the processes will be punctuated by a publication, dialogue, the possibility for exchange, and culminate in the later presentation of new work at Project Arts Centre.

In various projects, working with 35mm and 16mm film, sculptural installations and through the publication of writing and the telling of their stories, Lonnie van Brummelen & Siebren de Haan have been researching the visual terrain of the changing borders of Europe, later developing projects which actively investigate the effect that its expansion has on local economies and the effective trade sanctions that are employed to standardise the market value of various raw materials. Van Brummelen & de Haan will present the 35mm triptych Grossraum and The Formal Trajectory, one of their earliest research projects in which they collaborated and an important founding chapter in their on-going journey. With the emergence of the Celtic Tiger, Ireland has seen rapid capitalist economic expansion, contributing towards inevitable cultural self-interrogation and a heightened awareness of global identities and economies. Within this context of rapid development and expansion, keeping in mind Ireland's relationship to the EU, in 2007 Lonnie van Brummelen & Siebren de Haan have been invited to continue their research and produce a new work for Project.

Grossraum is a 35mm film, shot at the location of three of the borders of Europe - Hrebenne, the border between Poland and Ukraine; Ceuta, the border between Spain and Morocco; and Lefkosia, the divided capital of Cyprus. The landscapes, largely unprepared for their status and capacity as official control nodes, meander over traffic-jammed deadlocks, illegal trade and make-shift border structures. The Formal Trajectory tracks the process surrounding the production of Grossraum, including embassy and border patrol correspondence, explaining their intentions and telling stories about the bureaucratic realities which make these abstract borders become frustratingly concrete.

For press information for the other artists and high quality images accompanying the exhibition, please contact Aisling McGrane aisling@project.ie