The show features 12 works that use architectural models, renderings, drawings, videos, and photographs to articulate the failed outcome of social and architectural programs in Cuba. Adopting the city of Havana as his laboratory, Garaicoa has been working since the early 1990s using a multidisciplinary approach. 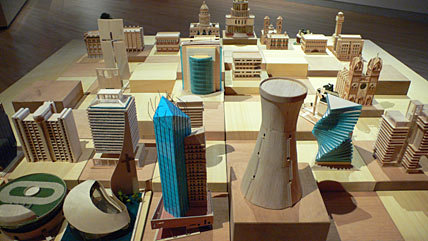 The Institute of Contemporary Art is pleased to present "Carlos Garaicoa," the first U.S. survey of work by Cuban artist Carlos Garaicoa, who addresses Cuba's politics and ideologies through the examination of modern architecture. Presenting a selection of new works created specially for the exhibition, "Carlos Garaicoa" opens in ICA's second-floor galleries on January 20 through March 25, 2006.

Curated by Alma Ruiz, Associate Curator of The Museum of Contemporary Art, Los Angeles, "Carlos Garaicoa" features 12 works that use architectural models, renderings, drawings, videos, and photographs to articulate the failed outcome of social and architectural programs in Cuba. Adopting the city of Havana as his laboratory, Garaicoa has been working since the early 1990s using a multidisciplinary approach that includes architecture and urbanism, narrative, history, and politics. His works are charged with provocative commentary on issues such as architecture's ability to alter the course of history, the failure of modernism as a catalyst for social change, and the frustration and decay of 20th-century utopias.

Garaicoa was born in Havana, Cuba in 1967 where he currently lives and works. He studied thermodynamics at the Instituto Hermanos Gomez and studied visual arts at the Instituto Superior de Arte in Cuba from 1989 to 1994. Although never formally trained as an architect, he has been an active observer of architecture and has applied this discourse to his artwork.

Interested in urban planning and a city's architectural social fabric, Garaicoa often illustrates his vision in large installations using various materials such as crystal, wax candles, and rice-paper lamps. Softened by the density of the white rice paper, the glowing lights project a fictionalized vision of a city that contrasts with the reality of urban centers around the world.

Cuban life—social, political, and cultural—inspires Garaicoa's work. After the Cuban revolution in 1959, many architectural projects and buildings were left unfinished or abandoned in Havana as well as in other Cuban cities. Garaicoa creates a series of pop-up books depicting the decrepit turn-of-the century buildings in Havana's Plaza Vieja district and buildings in other cities. Garaicoa addresses the collapsed buildings in Havana by pairing black-and-white photographs with drawings made of thread rendering the reality of the absence of these structures.

In conjunction with the exhibition is a publication entitled Carlos Garaicoa: Capablanca's Real Passion, an updated version of the artist's 2004 catalog republished in conjunction with the exhibition. An essay by Alma Ruiz was added to the existing texts by Adriano Pedrosa, Orlando Hernandez, and an interview with the artist conducted by Lorenzo Fusi with color reproductions. An evening of special programming entitled Cuba Explored will also be held Wednesday, March 21, 2007 beginning at 6pm.

"Carlos Garaicoa" is organized by The Museum of Contemporary Art, Los Angeles.

ICA acknowledges the generous support of Galleria Continua; Peter & Mari Shaw; Barbara & Aaron M. Levine; and the Greater Philadelphia Tourism Marketing Corporation for promotional marketing. Additional funding has been provided by The Horace W. Goldsmith Foundation, the Commonwealth of Pennsylvania Council on the Arts, The Dietrich Foundation, Inc., the Overseers Board for the Institute of Contemporary Art, friends and members of ICA, and the University of Pennsylvania. ICA is also grateful for in-kind support from Loews Philadelphia Hotel. (Information complete as of 12/07/06.)