Children often feature prominently in his images. The artist combines forms on the computer and assembles pictures that deceive our perception. His work balances between reality and perfection. They are magical-realistic images, as it were, a cross between narrative painting and staged photography. 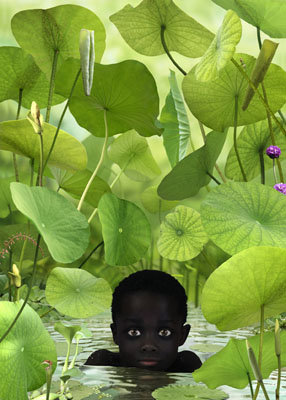 Ruud van Empel (1958) is a versatile artist. He has already enjoyed a broad artistic career as a decor and theatre designer, graphic designer, and film-maker. He has worked on various television productions as an art director, and in 1993 received the Charlotte Kohler Award for his television work and other associated activities. In the early nineties he began to present his artistic work to the general public, creating collages of plants, animals, flowers and trees, mounted in large forest landscapes that he had previously photographed in black-and-white. This black-and-white collage was then photographed once more to create an even whole. When the possibilities of Adobe Photoshop (=processing photos with the aid of a software package) became available, he could adapt his collages further. From the mid-nineties onward, he devoted all his endeavour to art photography, developing his images in thematic series. In this way, several series have been generated since 1995: The Office, Study in Green and, more recently, World, Moon & Venus.

Since 2002, he has been working a great deal with nature and, in doing so, he has definitively found his present-day characteristic visual language: photographic works with an unbelievable clarity of colour, rich in detail, with intriguing representation, and a fairytale ambience. Children often feature prominently in his images. Ruud van Empel combines forms on the computer and assembles pictures that deceive our perception. His work balances between reality and perfection. They are magical-realistic images, as it were, a cross between narrative painting and staged photography. The artwork that Ruud van Empel finally presents to the public seems harmonious and self-evident. The sophisticated viewer will suspect that intensive work has gone into the photo work presented, but the definitive image looks extremely refined.

To gain a good insight into the photography of Ruud van Empel, it is useful to review the major external influences from painting and photography on his work.