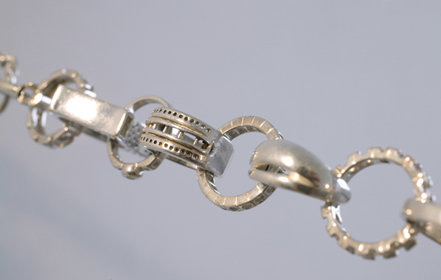 In her show in the Galerie Barbara Weiss, Ayse Erkmen creates fleeting situations at the border between art and the world of useful objects, and thereby opens up a new perspective on the aesthetics of the material she uses.

Ayse Erkmen sets up an unfamiliar and surprising context for everyday objects such as window-blinds and carpets, and also the kind of coloured lettering that is normally used for advertising and corporate logos. Erkmen takes these objects out of their normal setting, and as she reduces their use value she enhances them with a new luxurious essence. These objects are transformed into aesthetic objects, making it possible to explore a great variety of colours, shapes, surface structures and interconnections.

The windows and the entrance area to the three exhibition rooms are adorned with blinds of differing widths, colours and materials. The varied shape and the colours of these blinds mean that some of them allow a view through the window to the street. There are three carpets on the floor of the gallery, either thrown casually or laid out flat. They are both too narrow and too long for any practical use and yet, as with the blinds on the windows, this lack of use value still alludes to some functional purpose in an office or apartment setting.

In the main room of the exhibition, the letters of the alphabet and the numbers 0 to 9 are hung randomly on the wall in coloured Plexiglas. Ayse Erkmen transforms these letters and numbers into individually coloured and shaped objects and thereby annuls their normal use and meaning - these are no longer series of letters to form words or figures that make numbers. On a long continuous label - resembling the labels used in the textiles industry for the name of the designer or the brand of an item of clothing - the artist's name is stitched in handwritten style in white on a green background. Ayse Erkmen allows her signature, which normally guarantees the originality and authenticity of her works, to be industrially reproduced and thus demonstrates an absurd side to her artistic originality and identity.

At the entrance to the exhibition the visitor sees two large prints and two PC workstations. The prints show shapes consisting of signs and characters taken from a normal typewriter or computer keyboard - Ayse Erkmen uses these to create Typed Tables, typed cross-sections of tables.

In this exhibition, nothing seems to quite fit. The blinds and carpets do not correspond to any normal sizes, letters and numbers lack any direct correlation, while the name on the clothing label and the characters on the keyboard are transformed. Ayse Erkmen offers us a visual and intellectual openness that creates new ways of seeing and expands our powers of association.

For a long time Ayse Erkmen has been searching for words that hold some unusual and aesthetic significance. Here she has chosen the word /Habenichts/ - Have-Not. It fits well with her collection of words, and with the previous exhibition titles /Habseligkeiten/ - Belongings and /Mubiggang/ - Idleness. The purist gesture behind these words resembles Erkmen's artistic procedure; in both a simple but substantial luxury shines forth.
Birgit Szepanski