Her new works continue to explore themes in her painting of recent years. Gehl subverts the literal colours and hues of a scene to produce evocative and visceral images, which hint at a profound sense of the uncanny, through what at first glance is depicting the banal and unthreatening. 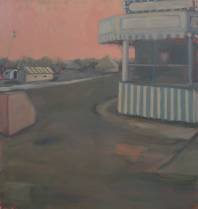 Trolley Gallery is proud to announce the second UK solo show of American artist Nina Gehl. These new works continue to explore themes in her painting of recent years. Landscapes seemingly devoid of physical human presence, at the same time resonate with a sense of the departed spirit of human touch. Working from old postcards and photographs she has taken, she subverts the literal colours and hues of a scene to produce evocative and visceral images, which hint at a profound sense of the uncanny, through what at first glance is depicting the banal and unthreatening.

Working with a reduced and sombre palette, incorporating ochres, umbers, blues and greys, she translates landscapes from glorious technicolour, until they reach a suspended state of melancholy and enigma. For these paintings in particular she has begun with the use of a flesh ochre ground, traditionally used to bring warmth to skintones when working in oil, and then worked in layer upon layer of paint thinned with turpentine to build up the final colours, sporadically leaving flashes of this red raw ground. Physically this technique evokes the building up and bringing together of memory and reflection in the mind, as layers and connotations of the conscious thought disperse to give way to the unconscious states of familiarity and recognition. The result is an uncertainty in how to perceive or comprehend. Cable cars hang suspended in a mountain valley, a fairground’s summer evening remains deserted of customers. There is a dislocation of the senses, almost disorientating, one wants to hear movement, the sounds of a crowd, the lap of waves on the shore of a lake, but there exists only a mute stillness, a faintly reverberating silence.

What adds to this eerie departure of life is that figures Gehl painted initially, were then painted over and scrubbed away, leaving their ghostly shadows hovering almost imperceivably. Similar to the loneliness felt in Edward Hopper’s sparsely populated diners and gas stations, where lost souls congregated in shared silence, Gehl has actively dispensed with any figures that may have inhabited the locations, as if vaporised on the spot whilst going about their daily life, blissfully unaware of their fate.

This sense of the unsettling from the seemingly everyday also echoes the painting of Luc Tuymans, in the horror of the banal, the bleached and faded memories of the darkest side of the human psyche smothered by the connotation of the comforting. Gehl too lures us into her scenes with a false sense of the secure, where there is always something more unsettling in a subversion of the mundane.

Nina Gehl graduated from Byam Shaw School of Art in 2005 after studying painting at Buffalo State College in New York. She has been part of numerous group shows both in the UK, as well as in the USA and Hungary, where she held a residency in 2001. She lives and works in London.