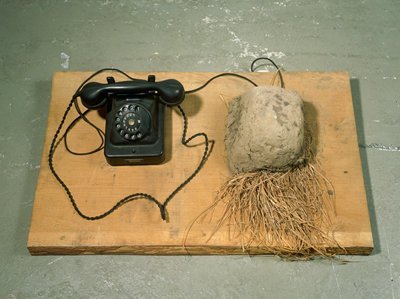 Opening on February 1, 2007, Zwirner & Wirth will present a selection of important sculptures and drawings by Joseph Beuys. The works on view, which date from 1953 to 1984, span the artist’s uniquely influential career.

Joseph Beuys (1921-1986) is considered one of the most important German artists of the 20th Century. His innovative experiments with materials and genres radically expanded the possibilities of art-making, thus influencing successive generations of artists. Beuys’s practice was multi-faceted, incorporating drawings, installations, performances, and even political activism into a unique body of work which promoted a mutable, new kind of art that encouraged individual and social transformation.

The works in this exhibition, which include a group of roughly fifteen drawings and six sculptures, exemplify Beuys’s unusual fusion of ideology and myth with formal invention. Beuys’s most significant contribution to 20th Century art, however, is perhaps his legacy as an artist of materials. In his work, he implemented utterly unconventional and often organic materials—which included found objects, fat, felt, and earth, among others—to push beyond what had hitherto been deemed acceptable in art. Beuys discovered that these visceral, evocative materials had the ability to call forth multiple associations, and he used them to encourage his viewers to contemplate possibilities for meaning beyond what conventional sculpture had been able to convey.

The exhibition will present an early sculpture from 1961 titled Hörner (Horns), which is made from rhinoceros horns and plastic tubing filled with red liquid, evoking a primal antenna-cum-circulatory system. Also on view will be the artist’s seminal Erdtelephon (Earth Telephone), 1968, which connects a rotary telephone to a lump of earth and straw. These key works point towards Beuys’s emphasis on the notion of art as a “transmitter” of information, or as a metaphorical conduit for change. Moreover, Beuys often deliberately chose materials that would change over time, in order to present, in his own words, “sculpture as an evolutionary process.” He went on to explain: “That is why the nature of my sculptures is not fixed and finished. Processes continue in most of them: chemical reactions, fermentations, color changes, decay, drying up. Everything is in a state of change.”[1] These ideas are embodied in his Aus dem Maschinenraum, Anhänger (From the Machine Room, Trailer), 1977, which presents cardboard boxes filled with decaying margarine and felt. The margarine in this sculpture comes from the “machine room” of Beuys’s well-known installation at Documenta 6 in Kassel, Germany, titled Honigpumpe am Arbeitsplatz (Honey Pump at the Workplace) (now in the collection of the Louisiana Museum of Modern Art, Humlebaek, Denmark), in which a rotating motor was covered in part by a large mound of margarine that would alternately soften and solidify.

Also on view will be a work made up of three chalkboards (Tafel I, II & III, 1978), which are filled with written text and drawings. These boards come from one of the artist’s now-famous performance lectures, in which he delineated his political, social, and artistic theories and comprises a key example of his conception of “social sculpture” (a term coined by Beuys to describe a notion of an artistic practice that combined social idealism with the creative process). The three boards document the artist’s ideological concerns, providing diagrams for his theories, such as “Capital=Art” (the notion of art as a spiritual commodity), and “Everyone is an Artist.” As Mark Rosenthal notes, these boards, “were, in effect, ‘calls to action’ by which Beuys intended sculptures that would induce a state of contemplation, imaginary possibility, or a desire to change the world.”[2]

The exhibition will be accompanied by a fully-illustrated catalogue that will include an essay by Mark Rosenthal.